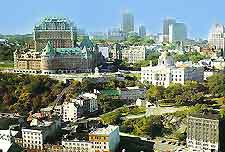 Quebec City may have a fairly small population, but the area is vast and Quebec City comprises many notable districts, communities, neighborhoods and locations. After merging with a number of nearby towns and cities, including Charny, Île d'Orléans, Lévis, Loretteville and Sainte Foy, the relatively new Greater Quebec City has grown dramatically in size and is now almost 100 times bigger than its earlier size.

Although Quebec City is very uniform in both feel and character, an area of the city stands on top of the Cape Diamond (Cap Diamant) cliffs, with the rest of the city lying below. These districts of Quebec City have become known as Upper Town (Haute Ville) and Lower Town (Basse Ville), with each containing both old and new areas. Old Town is the very heart of the Quebec City and is split between both Upper Town and Lower Town districts, containing many of the city's most historic landmarks and significant buildings. Walking tours of Old Town are available and often extremely popular. Here are Quebec City's main districts, neighborhoods and locations. 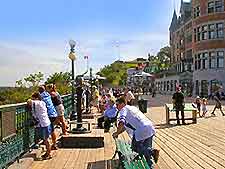 Standing outside of the historic wall in Quebec City's Upper Town district are a number of notable sights, such as the legislative buildings of the National Assembly, some of the best restaurants in Quebec City, and many lively nightspots and bars. Heading in a westerly direction, the René Lévesque Boulevard and the Grande Allée lead to the Wilfrid Laurier Boulevard.

The Old Town part of the Upper Town District is steeped in history and is the original fortified part of Quebec City. Highlights here include the famous Quebec Citadel, full of military memorabilia and popular changing of the guards' ceremonies. Also worthy of a visit in this district are the Battlefields National Park, the Musée du Fort, the Musée d'Art Inuit and the Chateau Frontenac. The Dufferin Terrace and Promenade des Gouverneurs can be found in this part of Quebec City, which are two particularly popular boardwalks that stretch along the riverfront and offer superb views of the St. Lawrence River. 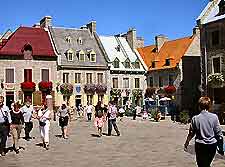 Beneath the cliffs, the Lower Town district of Quebec City is home to many top attractions. Situated on the northern, southern and western sides of Upper Town, this area features many residential communities, important businesses and a selection of motels. Standing below the spectacular Chateau Frontenac, Old Lower Town is the most historic part of Quebec City and is sandwiched between the St. Charles River and the St. Lawrence River, alongside the Cape Diamond cliffs. The heart of Old Lower Town is the Place Royale, the main public square in this area, dating back more than 400 years, with surrounding streets lined with restaurants, shops and art galleries. The Funicular Railway is also nearby, together with the tourist information center, which offers the latest information about Lower Towns' many seasonal events. 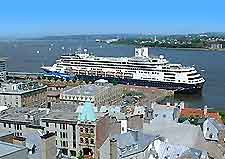 Centered around the historic harbor in the Lower Town district, Quebec City's Old Port district (Vieux Port) has been extensively renovated and redeveloped. The impressive waterfront area of Quebec City is home to a large group of notable buildings, which include government offices, shopping centers, condos and the outstanding Musée de la Civilization, which is a must-see attraction. The scenic district leads towards the Agora, which is Quebec City's outdoor concert bowl, which hosts many major summer festivals and performances. Also nearby is the Naval Museum of Quebec, which traced the maritime heritage of the city.