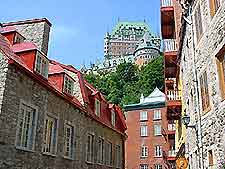 Settled by Native Indians, founded by the French and taken by the British, Quebec City has some of the most noteworthy history in Canada, and is certainly the most European-looking city in the nation.

It is as French as any city in France, it uses the Franco tongue and it enjoys French-centric culture and festivals. Much of the original fortifications and old town buildings remain, with the city boasting UNESCO World Heritage status as a result.

Settling and the Old Town

Samuel de Champlain, a French explorer, founded Quebec City in 1608 where the St. Lawrence River narrows. Today, the fine public square of Place Royale, surrounded by old buildings and dotted with cafés, marks the spot. A fort was built 70 years prior to this by Jacques Cartier, another French explorer, although it was soon abandoned due to Algonquin unrest.


Champlain proceeded to build two forts to defend against the British and the Iroquoian tribes. The Fortifications of Quebec are today preserved and encircle the upper part of Quebec City, providing insight into the city's heritage along with fine views and superb walking. The Old Town (Vieux-Québec) resides within the fortifications and is where you will find the bulk of the historical highlights. The beautiful St. Anne de Beaupré Basilica was also built around the time of the original fort and remains well preserved, being located in the east of the Old Town.

The British met little resistance on their drive to make Quebec City history. English General James Wolf was victorious over the French at the Battle of the Plains of Abraham in 1759. Quebec City quickly prospered under the Brits, who developed the fishing industry and fur trade. They also bolstered the city's fortifications, incorporating a fort (Quebec Citadel) into the original defenses.

Built to defend against possible American aggression during the War of 1812, the citadel resides at the spot where the Grande Allée meets the Old City wall and affords fine views over Quebec City. A changing of the guard ceremony can be observed here every morning and there's lots of military memorabilia housed inside.

Quebec City became the capital of the colonial province upon Canada, becoming a new country in 1867. The Parliament Buildings were erected in the St. Jean Baptiste district and can today be viewed on regular tours that take in their landscaped grounds. Despite British influence, Quebec and its capital remain French culturally. Indeed, movements for the creation of an autonomous French-speaking land are still active.

There are several prominent walks taking in Quebec City's main historic sights. The Governor's Walk is a scenic jaunt from the Funicular, along the old wall and down to the Plains of Abraham Park, where the British routed the French. A walk along Dufferin Terrace takes in the river, while hour-long horse-drawn carriage tours of the city are hugely popular.