Quebec City Weather, When to Go and Climate Information 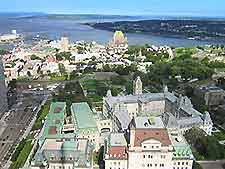 As with most cities in Canada, the weather and climate in Quebec City varies dramatically season by season, with hot and humid summers contrasting with Quebec City's cold, snowy weather during the winter months.

Spring is an appealing time to visit Quebec City, when the icy winter weather quickly and abruptly comes to an end. April heralds the beginning of the warmer weather in Quebec City, with average daily temperatures in April reaching up to 10°C / 50°F on occasion, although late snow flurries in April and even May are by no means unheard of. By May, the climate is particularly pleasant, with temperatures peaking at 16°C / 61°F, and at times even higher. Spring is a particularly short season in Quebec City, for no sooner has in begun than summer arrives. 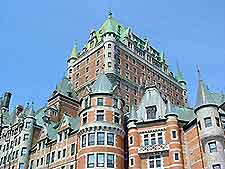 The summer weather and climate in Quebec City is extremely warm and this is without doubt one of the best times to visit the area. July and August offer Quebec City's hottest summer weather, with temperatures often recorded well above 25°C / 77°F. The summer season is from June to the end of September, when the temperatures begin to drop as fall approaches, although a late summer with unusually hot weather can run well into October. The highest levels of rainfall take place during the summer months, although these heavy showers are often short lived and followed by strong sunshine. Held each July, the Quebec City Summer Festival is one of the seasonal highlights.

The trees begin to color up and a chill fills the air when autumn arrives in Quebec City. Temperatures in October drop to around 10°C / 50°F, with occasional snowy weather. By November, the city's weather and climate is noticeably colder, affected by strong winds causing a definite wind-chill factor.

Locals in Quebec City have learned to welcome the cold winter climate, due to the recreational activities that are presented by the snowy weather. Heavy snowfalls ensure that winter sports are plentiful here, including ice skating, tobogganing and even cross-country skiing. January features the coldest weather and climate throughout the year in Quebec City, with average daytime temperature hovering around -7°C / 19°F. With many festivities on offer in Quebec City at this time of the year, the International Winter Carnival is perhaps the best known, attracting thousands of people to the area each February.