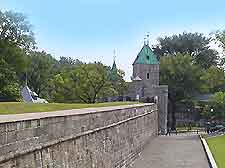 Quebec City is surrounded by ancient fortifications, which give the city a true historic appeal. The many landmarks and monuments in Quebec City have resulted in the city being accredited as a prestigious UNESCO World Heritage Site.

Some of the main landmarks and monuments in Quebec City include the 19th-century Parliament Buildings, the Place Royal and the Quebec Citadel. 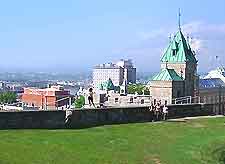 Address: 100 St. Louis Street, Quebec City, Quebec (QC), G1K 7R3, Canada
Tel: +1 418 648 7016
An integral part of Old Quebec, the Fortifications of Quebec, a National Historic Site, are extremely old and were originally built in the early 1600s, as a wall around the city. Consisting of around 5 km / 8 miles of stone walls with nearby walking trails, guided tours of this unique landmark provide a real insight into the city's rich heritage. An interpretation center is also available en route, full of interesting information about the Fortifications of Quebec.
Open hours: May to September, daily - 10:00 to 17:00; October to April - by appointment,
Admission: charge, discounts for seniors and children 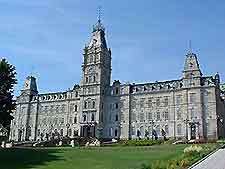 Address: Hôtel du Parlement, Quebec City, Quebec (QC), G1A 1A4, Canada
Tel: +1 418 643 7239
One of the most notable landmarks in the whole of Quebec City, the Parliament Buildings lie in the St. Jean Baptiste district and are surrounded by landscaped gardens. Dating back to the late 19th century, the Parliament Buildings are an important center of politics and still very much in use today. With impressive architecture and many well-preserved period features, regular guided tours of the interior are available.
Open hours: daily - 09:00 to 16:30
Quebec City landmark admission: 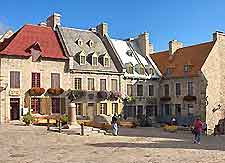 Address: 27 Notre Dame Street, Quebec City, Quebec (QC), G1K 4E9, Canada
Tel: +1 418 643 2158
Dating back to the beginning of the 17th century, Quebec City's Place Royale is one of Canada's most precious and historic landmarks. Comprising a number of buildings and streets, the Place Royale is an important area of Old Quebec, where you will find a host of restaurants, coffee shops and places to visit, most of which are full of character and steeped in history.
Open hours: October to June, Tuesday to Sunday - 10:00 to 17:00; July to September, daily - 09:30 to 17:00
Admission: free 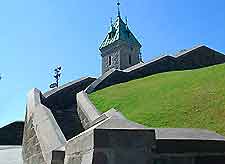