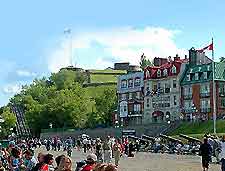 There is always something happening in Quebec City, with year-round local festivals, seasonal events and recreational activities on offer. Canada Day, on July 1st, is always a notable event in the Quebec City area, with a range of parties, festivities and events available both day and night. Two days later, the Birthday of Quebec City features a host of activities, to celebrate the city's founding around 400 years ago.

Some of Quebec City's most popular seasonal events and festivals include the Winter Carnival (Carnaval de Quebec) in February, the Festival of Snow (Festival de la Neige) each March, the Food Festival (Festival de la Gastronomie du Quebec) every April, Quebec City's International Theater Event in May, and the Big Laugh Comedy Event (Grand Rire) each June. Two of the area's largest festivals are the popular Quebec City Provincial Exhibition (Expo Quebec) in August, and the Quebec City Summer Festival during July, both of which feature a range of events and attract large crowds.