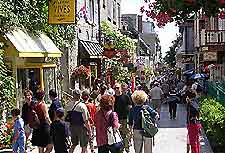 Quebec City contains a number of shopping districts, where modern high-street shops stand alongside more historic stores and independent specialty outlets. For a large cluster of shops all under one roof, head to Quebec City's Galeries de la Capitale, a vast shopping mall containing over 250 shops.

Vieux Québec is a particularly popular shopping district in Quebec City and contains many attractive 19th-century buildings, together with restaurants, entertainment, attractions and endless shopping opportunities.

Most shopping centers and malls in the Quebec City area open between 09:00 to 09:30 from Monday to Friday, generally closing at around 17:00 or slightly later. Each Thursday, many of the main shops and shopping malls remain open later, until around 21:00. Most shops in Quebec City open on Sundays, although the hours are shorter, usually between 11:00 to 17:00 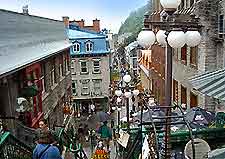