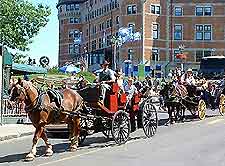 Many of the most popular tourist attractions in Quebec City have become an integral part of city life, such as Quebec City's Dufferin Terrace and Promenade des Gouverneurs boardwalks, which lie alongside the scenic St. Lawrence River.

No trip to Quebec City is complete without a trip on the Quebec Funicular Railway, one of the city's most famous tourist attractions.

Also popular, river cruises are a relaxing way to admire many of the city's most striking architectural attractions and landmarks from a distance. 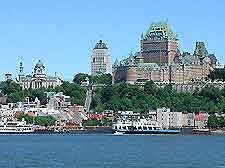 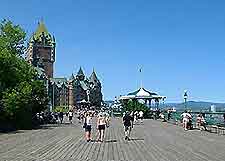 Address: Place Terrasse Dufferin, Quebec City, Quebec (QC), G1R 4P5, Canada
Central to city life, Dufferin Terrace is a major boardwalk area alongside the St. Lawrence River, in Old Quebec. This promenade is known throughout Quebec City for its lively street entertainment and nearby attractions, and is a particularly popular spot during the summer months, when many tourists choose to congregate here. The Promenade des Gouverneurs can be found at the southern end of the Dufferin Terrace.
Open hours: daily - dawn to dusk
Admission: free 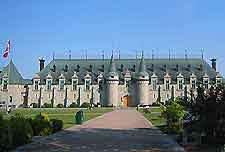 Address: 2 d'Auteuil Street, Quebec City, Quebec (QC), G1K 7R3, Canada
Tel: +1 418 648 4205
Situated in the heart of Old Quebec, the Artillery Park National Historic Site was last used as barracks for both the British and French in the mid-20th century. Guided tours of the site are available and take in the many restored rooms, while other attractions include regular summer gunfire demonstrations and a popular interpretive center, with a host of multimedia exhibits.
Open hours: April to October, daily - 10:00 to 17:00, November to March - by appointment
Admission: charge, discounts for seniors, students, children and families, children under six free 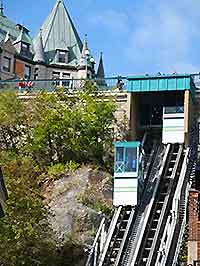 Address: 16 Petit Champlain Street, Quebec City, Quebec (QC), G1K 4H4, Canada
Tel: +1 418 692 1132
One of Quebec City's most famous and unique tourist attractions, a visit to the city is not complete without a ride on the eye-catching Quebec Funicular Railway. Providing easy access up an extremely steep gradient, the Funicular Railway operates throughout the year and the short journey is extremely inexpensive. With a number of attractions, such as outstanding city views and a gift shop, the railway was modernized at the end of the 20th century, although it still retains much of its earlier charm and character.
Open hours: daily, October to March, September and October - 07:30 to 23:30; April to June - 07:30 to 23:30; July and August - 07:30 to midnight
Admission: charge

Address: 296 René Lévesque Boulevard Est, Quebec City, Quebec (QC), G1R 2B3, Canada
Tel: +1 418 643 8131
Dating back to the 1960s, the Grand Théâtre de Quebec is a modern building, hosting many regularly concerts by the renowned Quebec Symphony Orchestra, together with operas and other theatrical performances. Seating almost 2,000 people, the Grand Théâtre de Quebec also features a smaller theater area, which has become a major venue for many events in the city.
Open hours: hours vary
Admission: charge for events and performances 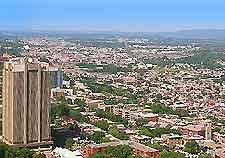