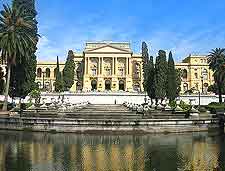 Sao Paulo has an interesting and diverse history, evidence of which can be seen in the many museums scattered throughout the city. The list of attractions and museum within the city of Sao Paulo is ever growing, and it is worth keeping your ears and eyes open for any new venues that may have recently opened.

Two of the most historic museums in Sao Paulo are the Museu de Zoologia and the Museu Paulista, both of which offer a very pleasant way to while away a few hours. The Memorial do Imigrante, the Instituto Tomie Ohtake and the Museo do Iparanga also rank very highly. 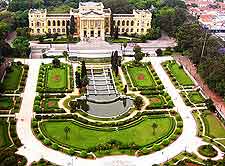 Address: Rua Alvares Penteado, 112, Sao Paulo, Brazil, BR
Tel: +55 011 311 336 51
The Museo do Iparanga is housed in a beautiful old building dating from 1901, and contains an extensive collection of furniture, costumes and paintings from the city's history. Set in stunning gardens with wide paths and mosaic patios, this is one of the city's best museums and not one to overlook.
Open hours: daily
Admission: free

Address: Rua Visconde de Paraiba 1316, Moóca, Sao Paulo, Brazil, BR
Tel: +55 011 669 309 17
The perfect place to gain some understanding of Sao Paulo's diversity is this museum, housed in a late 19th century building that once held more than 10,000 immigrant labourers. A collection of photos and other memorabilia documents the city's past. The Memorial do Imigrante building itself is actually part of the overall complex known as the Immigrants Lodging House (Hospedaria de Imigrantes).
Open hours: Tuesday to Sunday - 10:00 to 17:00
Admission: charge, free for seniors and children under seven

Address: Avenida Nazaré 481, Ipiranga, Sao Paulo, Brazil, BR
Tel: +55 011 616 581 00
Lying within the centre of Sao Paulo and close to many of the city's attractions, the Museu de Zoologia is an exceptional Zoology Museum, with one of the biggest collections of its kind within the whole of Latin America. The preserved creatures of display are grouped into themed areas, such as birds, fish, insects, mammals and reptiles, with the collection actually dates back more than 120 years and continually growing in size and stature.
Open hours: Tuesday to Sunday - 10:00 to 17:00
Admission: charge

Address: Parque da Independencia, Ipiranga, Sao Paulo, Brazil, BR
Tel: +55 011 616 580 00
The Museu Paulista serves as the oldest museum within the whole of Sao Paulo and was opened as long as 1895. Sited within the centrally located Parque da Independencia (Independence Park), the museum features an enormous collection of local artefacts and historical significance, while outside, the gardens were inspired by those of the very famous Palace of Versailles, on the outskirts of Paris, France. Next to the Museu Paulista is the city's imposing Monument to Independence.
Open hours: Tuesday to Sunday - 09:00 to 16:45
Admission: charge