Getting Around, Sao Paulo Travel, Transport and Car Rental 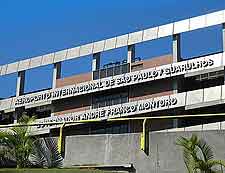 The chaotic, dizzying streets of Sao Paulo can be difficult to navigate and travel around, and many a tourist has given up in frustration before reaching their chosen destination, often using various means of transport. However, armed with a decent map, most of the tourist sites around Sao Paulo can actually be traversed on foot, since they lie between the Avenida Paulista and the historic centre.

For places that are further away, the subway is relatively easy to navigate, while metered taxis can be used to travel longer distances. Those wishing to travel outside of Sao Paulo city centre will find a good choice of bus transport operating from within the city. 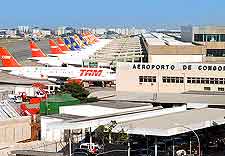 Address: Guarulhos International Airport (GRU), Guarulhos, Sao Paulo, 07141-970, Brazil, BR
Tel: +55 011 445 294 50
Tel: +55 011 509 090 00
Situated around 25 km / 18 miles from Sao Paulo city centre, Guarulhos International Airport has two terminals, which are close enough together to be easily reached on foot. The airport is the international base for a large number of airlines and the onsite buses regularly travel to and from the city centre. Visitors can make full use of car rental agencies in both terminals.

Address: Congonhas Airport (CGH), Avenida Washington Luiz, Campo Belo, 04695-900, Sao Paulo, Brazil
Congonhas Airport lies some 8 km / 5 miles to the south of the city, where it serves as Sao Paulo's secondary air facility, after Guarulhos Airport. However, Congonhas Airport is still a major transport hub and although it handles mainly domestic flights and airlines, the passenger numbers are still around 18 million per annum. 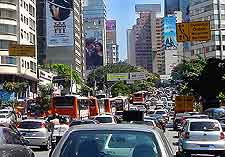 A number of international car hire companies operate in the city, although navigating around the maze of grids that make up Sao Paulo's streets can be a daunting task and probably should not be attempted by a newcomer to the city. The roads both within and outside the city are excellent, but they are busy at all times of day, and so travelling anywhere could take hours, depending upon traffic conditions. 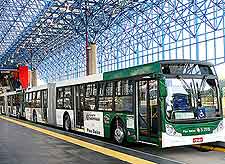 There are four different bus stations in the city, so do make sure that you know which one you need to go to in advance. City bus transport tends to be slow, hot and overcrowded, and so for many, buses not the best way to travel within the city. Tourist information booths can be found throughout the city and they are great sources of information on buses. 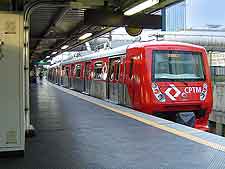 Four train stations serve Sao Paulo. From the Luz Station you can reach the coast, while suburban trains can be boarded at the Julio Prestes Station or the Roosevelt Station. Catch a Silver Train to Rio at the Barra Funda Station.

The city's subway trains are known locally as simply the 'Metro' and five colour-coded lines are currently in operation (blue, green, red, purple and yellow). Metro transport is modern, fast and safe, with tickets being available at either machines or from manned counters.

Taxis are normally metered, but you should check that the driver turns the meter on. Two of the most reliable taxi services are Use Taxi and Paulo de Taxi, which will make advance arrangements to drive you around the city. Be aware that Sao Paulo's roads are often congested, and so those wishing to travel around in a taxi should note that it can take time.