Sao Paulo Events, Things to Do and Festivals 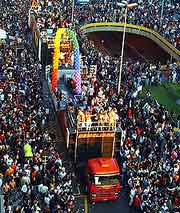 Known throughout Brazil for their carefree way of living, the local Paulistanos are renowned for their energy when partying and Sao Paulo hosts a large variety of festivals and events.

It is a good idea to research any festivals that may occur during your visit, as even locals have been known to miss events in the sprawling urban labyrinth that is Sao Paulo.

A wide range of events and things to do are held all throughout the year, with the biggest ones drawing quite literally thousands to the city. Sao Paulo's Gay Pride is one favourite, while the Italian St. Vito Festival attracts a large Italian crowd.