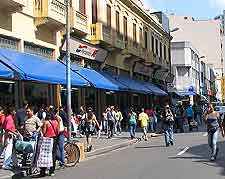 The choice of shops within Sao Paulo is simply enormous and you could easily spend an entire month here exploring the endless selection of shopping malls alone. There are now more than 70 different malls in Sao Paulo, with the best including the Eldorado, Ibirapuera, Iguatemi, Morumbi and the Patio Higienópolis. This gives you an indication of the extensive shopping scene in Sao Paulo, with virtually everything available in Brazil being sold in this city.

Imported goods sold in Sao Paulo do tend to be a little more pricey than similar items produced in Brazil, so it is definitely worth shopping around for souvenirs. Most shops tend to open at 10:00, Monday to Saturday, and then close at around 18:00. The immense selection of shopping malls in Sao Paulo do offer long hours, staying open until 22:00 most nights, and opening on Sundays, from 12:00 to 20:00. 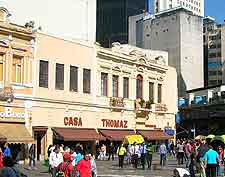 There is not one single shopping district or street within Sao Paulo. Instead, there are many specialised areas selling all manner of goods. If you are look for designer fashion, then the boutiques lining the Rua Oscar Freire in the Jardins neighbourhood may well be of interest, ranking as one of the world's most luxurious, while for cheaper high-street clothing, then the Rua José Paulino is a good place to begin your quest.

Other prominent shopping streets in Sao Paulo include both the Rua Augusta and the Rua Haddock Lobo, as well as the Alameda Lorena, although of which are to be found within the Jardins area. In downtown Sao Paulo (Centro), the locals tend to favour the market stalls along the Rue 25 de Marco, where you will find everything from toys and textiles, to Brazilian coffee, shiny gemstones, football shirts and handmade jewellery.