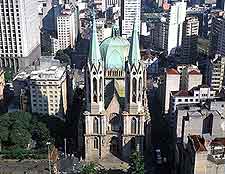 Among Sao Paulo's main landmarks is the eminent commercial avenue, the Avenida Paulista, which offers impressive urban scenery. As evidence of the importance of religion to many of the city's inhabitants, the Metropolitan Cathedral and the Sao Bento Monastery still entice huge crowds to worship.

From the Banespa Skyscraper or the Edificio Itália, visitors can look down on the urban jungle of Sao Paulo below, while the imposing Edificio Copan substantiates the city's claim to be a modern and growing metropolis. 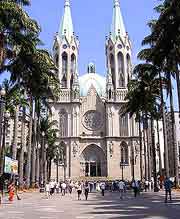 Address: Praca da Sé, Centro, Sao Paulo, Brazil, BR
Tel: +55 011 310 768 32
This major landmark can hold up to 8,000 worshippers and lovers of architecture will appreciate the stunning stained glass windows and details like the delicately carved coffee beans. The Metropolitan Cathedral is a neo-Gothic church and lies in Cathedral Square (Praca da Sé) in the heart of the old city. Built in the early 1900s, the church features stained glass panels from France and Italy as well as Brazil. Bells ring to the tune of the national anthem each morning at 08:00 and then hourly throughout the afternoon.
Open hours: daily - 08:00 to 17:00 (mass daily - 08:30 to 12:00)
Admission: free, charge for tours 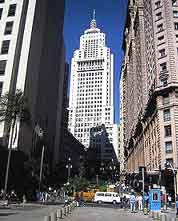 Address: Rua Joao Bricola 24, Banespa, Sao Paulo, Brazil, BR
Tel: +55 011 200 808 02
Where better to enjoy panoramic views of Sampa (Sao Paulo) than from one of Brazil's tallest buildings and answer to the New York Empire State Building? View the thriving city from a height of 35 storeys and be dizzied by its otherworldliness for free. The Banespa Skyscraper also goes by the name of the Altino Arantes Building and has become one of the city's most instantly recognisable landmarks, with its distinctive Art Deco facade dating back to the early 1940s and towering over 160 metres / 525 feet in height.
Open hours: daily
Admission: free 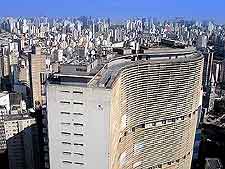 Address: Avenida Ipiranga, 200, Sao Paulo, Brazil, BR
Proving to the world that Sao Paulo is a modern city, this beautiful and up-to-the-minute S-shaped building is more than just an apartment building. Containing a range of restaurants, shops and even hairdressers and a church, the building is a vision of how life in the future could look. The Edificio Copan boasts some 35 storeys and is just over 130 metres / 426 feet high.
Open hours: daily
Admission: free 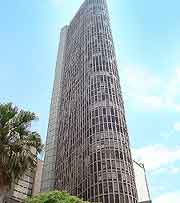 Address: Avenida Ipiranga, Praca da Republica, Sao Paulo, Brazil, BR
One of Sao Paulo's tallest buildings, the elegant Edificio Itália offers spectacular views over the city, and at 168 metres / 551 feet high, this really is one building that is hard to miss. Built over a ten-year period and finally completed in 1965, the 44th floor is home to the rather exclusive Terraço Italia restaurant. Tourists will likely appreciate the observation deck on the rooftop.
Open hours: daily
Admission: free to diners

Address: Sao Paulo, Brazil, BR
The esteemed College of Law is Brazil's oldest education institute and lays next to the Igreja de Sao Francisco de Assis. It was founded in 1827, but the current building was finished in the early 1900s. The architecture is especially elegant and reflects the very best of that period, with stone columns, detailed carvings and grand balconies.
Open hours: daily
Admission: free 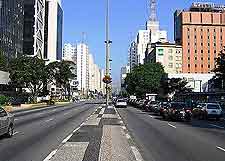 Address: Avenida Paulista, Sao Paulo, Brazil, BR
Ranking amongst the city's most important avenues, this lengthy stretch is noted for its numerous corporations and financial institutions. The Avenida Paulista runs alongside a small forest park and is also where you will find the Sao Paulo Museum of Art. Several cultural events are hosted here throughout the year, including Gay Pride and the Saint Silvester Road Race.
Open hours: daily
Admission: free

Address: Sao Paulo, Brazil, BR
The centre of Sao Paulo can sometimes feel like a ghost town at weekends, but the Sao Bento Monastery attracts massive crowds each Sunday to take part in Gregorian chants along with fellow worshippers. Built in 1650, the church houses the ashes of explorer Fernao Dias.
Open hours: daily
Admission: free 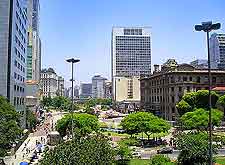 Address: Sao Paulo, Brazil, BR
Linking Largo Santa Efigania with Largo Sao Bento, the Viaduto do Efigenia is one of the city's modern landmarks. Restored in 1978, the viaduct is today painted in vibrant colours and is overlooked by the Mirante do Vale skyscraper, which is amongst South America's tallest.
Open hours: daily
Admission: free