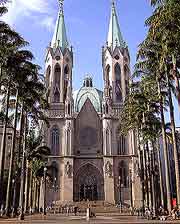 Sao Paulo is Brazil's largest and richest city, boasting almost 500 years of history and playing a pivotal role in the rise of an independent Brazil.

From religious beginnings to the discovery of gold, cultivation of all-important coffee, waves of immigration and expansion through industry, the history of Sao Paulo is an intriguing one.

Founding of the City

Sao Paulo was founded back in the early 1530s, a couple of decades after the first Portuguese colony, Sao Vicente, was set up in Brazil. The founders were Jesuit priests looking for somewhere suitable to construct a church. With the help of native Indians, Father José de Anchieta built a church and school amidst an attractive plateau region, between present-day Rio de Janeiro and Florianopolis.


Father Anchieta named it Sao Paulo (St. Paul) and the town quickly grew around its early churches and convents. The oldest church still standing today is the historical Sao Bento Monastery in the city centre. It hails from 1650 and is home to the ashes of Fernao Dias Pais Leme, a famous Portuguese explorer and pioneer. On a grander scale is the later Metropolitan Cathedral, which resides in Cathedral Square (the Praca da Sé). 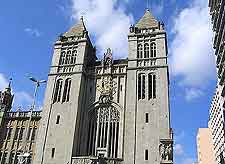 In its early history, Sao Paulo remained a relatively unknown backwater and didn't get noticed by the outside world until the so-called 'bandeirantes' (flag bearers) headed out into the hills from here in their quest for gold. They captured Indians as slaves and set up many trails that later became heavily used roads. Gold and precious stones were discovered in Minas Gerais, and Sao Paulo, being the gateway to Minas Gerais, enjoyed much benefit.

The majority of the subsequent wealth naturally went into the wrong 'deep' pockets, although funds were also used to set up sugar cane plantations, which led to extended income for the city. Sao Paulo was declared a city not long after the discovery of gold, in the year of 1711.

History of Coffee and Slavery

What would become important for the growth of Brazil came a decade after Sao Paulo's historical city status was granted, namely the cultivation of coffee here from the latter part of the 1720s. Sao Paulo enjoyed big profits, eventually becoming a powerful centre of commerce for this commodity by the mid-1800s. Slaves were mainly used to work the numerous coffee plantations, but after slavery was abolished in 1888, the city attracted many immigrants.

They mostly came from European cities (such as Germany and Italy) and parts of Asia (mainly Chinese, Japanese and Koreans, as well as Arabs), while Sao Paulo also attracted a large number of Jews. Visitors today may like to check out the Immigrant Memorial Museum, on the Rua Visconde de Paraiba, where you can learn all about these early immigrants. The building itself hails from the late 1800s and was previously called home by many of the immigrants. Of note, the coffee boom continued through the 19th century and into the early part of the 20th century, along with the establishment of many other industries. 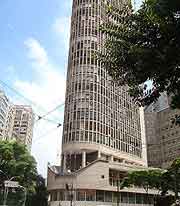 Although Brazil remained a colony until the latter part of the 1800s, it was declared independent by self-proclaimed emperor Pedro, the eldest son of the Portuguese king. The Monument to Independence within Independence Park (the Parque da Independencia) marks the occasion and visitors can learn more about this era at the nearby Paulista Museum.

After coffee came, several other prominent industries made a name for themselves in burgeoning Sao Paulo, including the car industry through major companies such as Ford and GM. The city quickly became a centre for production in Latin America and, by the 1950s, rivalled Rio de Janeiro.

Today, Sao Paulo boasts a powerful stock exchange and an important financial district - located along the Avenida Paulista. The historic centre also remains, in part, while the city is home to many colleges - including the 19th-century College of Law, and various skyscrapers - including both the Banespa Skyscraper and the Edificio Itália.