Getting Around, Bodrum Travel, Transport and Car Rental 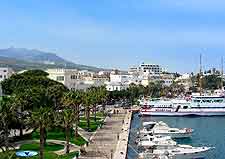 Travelling to this popular Turkish resort is made easy by the Milas-Bodrum Airport, which accepts flights direct from London and other major European cities. There is a choice of ground transportation to the town and resorts surrounding Bodrum, including minibuses, an airport bus and taxis.

The two harbours, the main beach, and downtown Bodrum are easy enough to travel about on foot and unless you plan on seeing a bit of the countryside, having a car is not necessary. Minibus transport, known locally as the 'dolmus', offers the main transport option around town. 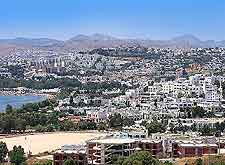 
Milas-Bodrum Airport receives flights from all over Europe, including frequent arrivals from London Luton. The international terminal is a fairly new building, where facilities include duty-free shops, cafés and bars, ATMs and currency exchange. There is an airport bus on hand, which provides travel into the town centre and is operated by HAVAS, while fixed-price taxi transport is also available. Those who hire cars have a straightforward drive along a new highway to Bodrum, a 30-minute journey away. 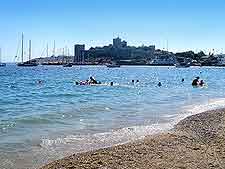 Cars can be pre-booked online and picked up at Milas-Bodrum Airport. The drive to town is easy and the surrounding countryside has good roads and nice scenery, particularly along the coast up to Izmir and across to Antalya. However, driving in Bodrum itself can be a little tough, owing to tight, busy streets. 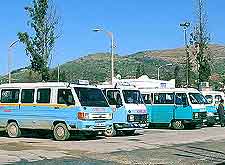 You can get to Bodrum by bus transport via Istanbul, travelling overnight and arriving here early next morning. Minibuses also come in regularly from all points in Turkey. Bus travel within Bodrum itself is mainly by minibus (dolmus), with connections between surrounding villages and beaches. The central bus station is located on Cevat Sakir Street, although drivers will pick you up and drop you off anywhere along their route.

There is no rail travel available within the town of Bodrum.

Taxis are relatively expensive in Bodrum and taxi stands can be found at arrivals at the airport, around the central bus terminal, at the main beach and harbour, and outside major hotels. Airport taxi transport is supposed to be a fixed price to the centre of Bodrum, as well as to other destinations, but do double check with the driver before getting in.