Bodrum Events, Things to Do and Festivals 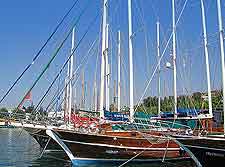 Although Bodrum doesn't have the grand festivals that are generally seen in Ankara or Istanbul, it does have one or two notable events of its own. The Muslim events of Ramadan and Eid ul-Adha are the most revered in Bodrum, for fasting and feasting respectively.

Leading events that tourists can get in on in Bodrum are New Year's Eve and New Year's Day, the somewhat gruesome Kurban Bayrami in February, and the fun Bicycle Festival in May. Popular nearby things to do include the Traditional Mesir Festival in Manisa each April, and the Aspendos Opera and Ballet Festival in Antalya in June.