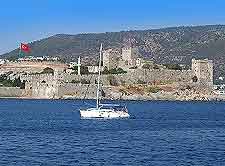 There are a couple of prominent landmarks in Bodrum that warrant a few hours of your time and can be seen from just about anywhere you stand. Bodrum Castle (Castle of St. Peter) is on the harbour and offers the best views. as well as entry to the much-celebrated Underwater Archaeology Museum.

The Ancient Amphitheatre is the other main landmark, which can still be seen in its entirety, lying up on the hillside behind Bodrum. The Mausoleum of Halicarnassus (Bodrum's old title) is the town's most revered landmark, due to its age and brilliance, although only the foundations remain. 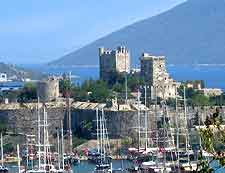 Address: Eastern Bay, Bodrum, Turkey, TR
Tel: +90 0252 316 2516
Bodrum Castle, also known as the Castle of St. Peter, is the most famous and striking landmark in the town, located as it is overlooking the seafront. It was constructed in the early 1400s by the Knights Hospitaller. This ancient medieval castle is one of the best preserved of its kind, although today it houses the much ballyhooed Museum of Underwater Archaeology, as opposed to repelling unwanted forces.
Open hours: Tuesday to Sunday - 09:00 to 12:00 and 14:00 to 19:00
Admission: charge, discount for children 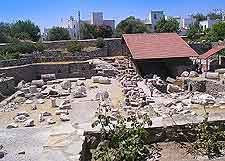 Address: Turgutreis Caddesi, Bodrum, Turkey, TR
Tel: +90 0252 316 1219
The Mausoleum of Halicarnassus at Bodrum is the resort's number one landmark, and famously one of the Seven Wonders of the Ancient World. It is over 2,300 years old, having been constructed in 350 BC by Artemisia II, and is now an open-air museum. Unfortunately, the mausoleum has been all but ruined at the hands of successive earthquakes over the ages and only the foundations remain. In its heyday, the building was resplendent with pillars and a pyramid-shaped roof, complete with a statue of the king and queen on a chariot on top. Some of the ruins have been used to reconstruct Bodrum Castle.
Open hours: Tuesday to Sunday - 08:00 to 17:00
Admission: free

Address: Bodrum Castle, Eastern Bay, Bodrum, Turkey, TR
As well as housing the town's acclaimed Underwater Archaeology Museum, Bodrum Castle is also home to the impressive French Tower. It is the site of the tomb of Queen Ada, a Carian princess and a powerful lady of the day. She died aged 29 sometime around 340 BC and was buried along with a huge amount of jewellery, including a gold crown and a wreath of gold myrtle leaves.
Open hours: Tuesday to Sunday - 09:00 to 12:00 and 14:00 to 19:00
Admission: charge 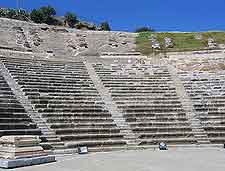 Address: Kibris Sehitler Caddesi, Tepecik, Bodrum, Turkey, TR
Situated just behind the town, this spectacular restored amphitheatre was cut into the hillside and in its heyday could seat up to 13,000 revellers. It was built way before the Romans arrived, although they greatly improved its appearance and capacity. Views of the town and sea from the rock tombs above the amphitheatre are outstanding. Follow the road from Bodrum to Gumbet to get to the site.
Open hours: Saturday to Thursday - 08:00 to 17:00
Admission: charge

Address: Turgutreis Caddesi, West Bodrum, Bodrum, Turkey, TR
In the western part of Bodrum, the Myndos Gate is the town's last remaining remnant of the 6-km / 4-mile long walls that once fully encircled the town. The landmark gate and walls are said to have been built in the 4th century BC by King Mausolus and have been well restored. Many soldiers of Alexander the Great's army died in the adjoining moat.
Open hours: daily
Admission: free