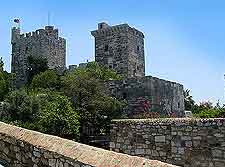 Milas Bodrum Airport, to the north-east of Bodrum, is a medium-sized facility that primarily caters for the towns of Bodrum and Milas, in south-western Turkey. Each year, more than three million people jet-set through this airport, making it one of the busiest such facilities in the region.

Two terminals are currently in operation. Built in the year of 2000 and previously used for international destinations, the domestic terminal is especially modern and full of passenger amenities. Additionally, a brand new international terminal has been completed as recently as 2012 and comes with nine air-bridges.

Due to the popularity of the region with tourists, many of the flights into Milas Bodrum Airport are seasonal. Turkish Airlines fly to several domestic cities, but the busiest international routes are operated by Thomson Airways, Thomas Cook Airlines and Pegasus Airlines.

If travellers decide to venture from the airport by car, they should head to Highway D330, which is less than 2 km / 1 mile from the terminals. Both Milas and Bodrum can be reached via this highway. The drive to Bodrum takes about 45 minutes, while the city of Milas is only 20 minutes away by car.

Taxis are the most predominant form of transport from the airport. Visitors can pre-book taxis online or find the taxi ranks outside the exits of the terminals. There are boards posted at the terminal that provide fare information for nearby cities and towns.

Turkish Airlines provides passengers with a shuttle coach, which operates from the Domestic Terminal. Buses travel into the centre of Bodrum, stopping at several stations before turning around in the heart of the city.