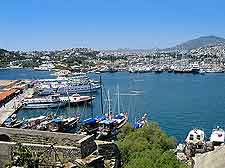 Until fairly recently, Bodrum was nothing more than a small and rather sleepy Turkish port town, best known for its white-washed houses, historic castle, scenic coastline and colourful bougainvillea. However, these days, the town is anything but sleepy, and Bodrum has greatly expanded, being full of life and energy and boasting a very swanky new marina, along with innumerable nightspots. The Iskele Meydani is a prominent square and marks the very heart of the town, being surrounded by eateries and home to the official tourist information centre.

Hordes of tourists arrive each summer in Bodrum, to soak up the Turkish sunshine on the outlying beaches and enjoy excursions to neighbouring villages. The history of the town goes back a long way, when its tomb of King Mausolus (Mausoleum) was actually considered as one of the Seven Wonders of the Ancient World, although today only ruins of this epic structure remain. 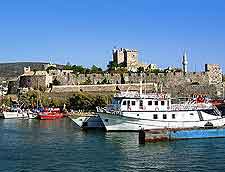 The town's Aegean coastline has long been the source of much of its popularity and the easterly side of Bodrum boasts a very popular beachfront, while nearby in the neighbouring village of Torba are some of Mugla's most beautiful beaches. Many tourists find that a highlight of their holiday in Bodrum is taking a boat trip to the Karaada (Black Island) or a similar destination. If you have a limited budget, a water taxi ride to the beach at Bardakci is also very enjoyable. During the hot summer months, you may like to head to the exciting water slides at the town's much-celebrated Dedeman Aquapark, or spend time taking a relaxing dip at the Hamam (Turkish Bath). More information about Bodrum Tourist Attractions. 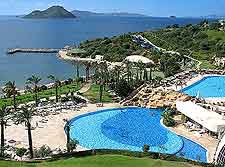 Built in the early part of the 15th century, Bodrum Castle also goes by the name of the Castle of St. Peter and has become something of an iconic symbol of the town, being very prominent and standing alongside the harbourfront. The French Tower of Bodrum Castle has become an attraction in its own right, being the location of the tomb of Queen Ada. Myndos Gate is another of the town's most important landmarks and this is actually the only remaining part of the medieval walls that once enclosed the entire town in the 4th century. On the outskirts of the town, the simply awesome amphitheatre is another ancient sight and has been fully restored to its former Roman glory. More information about Bodrum Landmarks and Monuments. 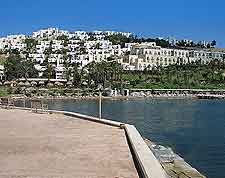 Housed within Bodrum Castle is the Underwater Archaeology Museum, which really is one of the city's true cultural highlights and contains a wealth of information relating to Turkish shipwrecks.

There are only a handful of further museums of note within the town, with the Fethiye Museum being another good bet and filled with colourful ceramics and hand-woven Turkish rugs. More information about Bodrum Museums. 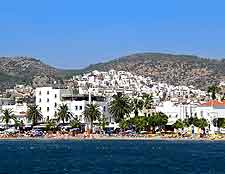 Spread around the Bodrum Peninsula is an almost endless selection of attractions and possible day trips. Especially near to the town itself is Milas, which stands just a short distance from the Milas Bodrum Airport. Regular 'dolmuses' (minibuses) connect outlying tourist destinations, such as Danizli, Izmir, Marmaris and Yalikavak. A little further afield, it is also possible to take a longer excursion to a number of major Turkish cities, including Antalya, Ankara, Bursa and Istanbul - Turkey's largest and most cosmopolitan city. Boat trips to the nearby Greek Dodecanese islands are also popular, with a choice of ferries regularly connecting Kalymnos, Kos and Rhodes. More information about Bodrum Attractions Nearby.