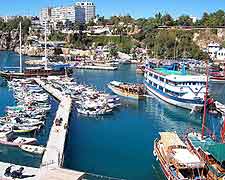 All over the Bodrum Peninsula are many wonderful towns, villages and attractions lending themselves to day trips. During the summer months, it is even possible to take a ferry from Bodrum to the Greek islands of Kalymnos,
Kos, Rhodes and Simi, all of which lie to the south and are much celebrated for their exceptional sandy beaches.

Nearer to home and still in Turkey are the innumerable attractions of Antalya, Denizli, Izmir, Marmaris, Milas and Yalikavak, all of which are highly suitable for day trips. A little further away from Bodrum and to the north is the exciting city of Istanbul, which is brimming with shops, mosques and personality. 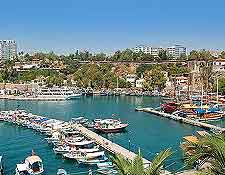 Located to the south-east of Bodrum and the biggest city on the Mediterranean shoreline of Turkey, Antalya is generally referred to as being the very heart of the Turkish Riviera and comes with a set of quality attractions to match this accolade. Much of the interest in Antalya awaits within the old quarter of Kaleici, where narrow alleyways are surrounded by ancient city walls. The Clock Tower is particularly prominent in Antalya, along with the Hadrian Arch and the Yivli Minaret, as well as the Balibey, Iskele, Murat Pasa, Musellim, Seyh Sinan Efendi and Tekeli Mehmet Pasa mosques. If you can find the time, do take a stroll around the Karaalioglu Park and the yacht harbour. 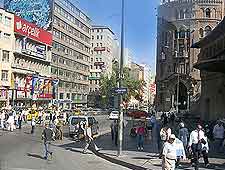 Turkey's proud capital city, Ankara is second only in size to Istanbul and lies in the very heart of Central Anatolia, to the north-east of Bodrum. Ankara resides to the north-east of Bodrum and is brimming with quality attractions, such as the Ataturk Mausoleum (Anitkabir), the Temple of Augustus and Rome, the Ankara Citadel (Hisar) and the Kocatepe Mosque. Families will favour the Aquapark Club Watercity, where water slides offer the perfect way to cool down during the summer sunshine.

An important commercial hub in Aegean Turkey, Denizli is to the north-east of Bodrum and deep within the countryside. Although not really much visited by tourists, Denizli does contain some interest. The market in Denizli is particularly lively and the wine production impressive, while the Pamukkale University provides a number of cultural attractions and amenities. However, most people come to Denizli to take advantage of its excellent bus connections, with regular buses connecting Fethiye, Istanbul, Nevsehir and Selcuk (for Ephesus). 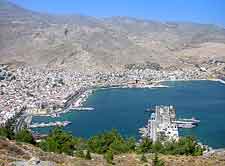 Address: Greece
Kalymnos is a popular Greek island and can be found within the south-eastern Aegean Sea, west of Bodrum. The beaches of Kalymnos are nowhere near the proportions of those on Kos, although do certainly swell with numbers during the summer season. Other tourists prefer the recreational attractions on Kalymnos, with the islands ranking as a premier global destination for rock climbing, with endless limestone crags and around 1,000 'sport routes', where fix bolts mark the way. 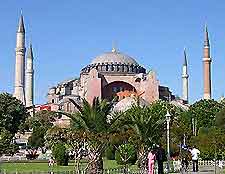 There really is nowhere else in the whole of Turkey where tourist attractions are so plentiful as those in Istanbul. As Turkey's biggest city, Istanbul is absolutely enormous and really does warrant a holiday to itself. Istanbul stands to the north of Bodrum and is home to the biggest covered market in existence, which encompasses almost 60 streets and features no less than 6,000 different shops. Many impressive mosques add much character to the skyline of Istanbul, with the Blue Mosque (Sultanahmet Cami) being one of the best. The Hagia Sophia (Aya Sofya) basilica also deserves a definite mention, along with the elaborate Topkapi Palace. 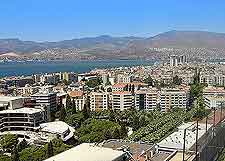 Turkey's number three city in terms of overall size and population, Izmir is situated to the north of Bodrum and was founded by the Trojans some 5,000 years ago. Therefore, the attractions of Izmir are of a particularly historical nature and include the Agora remains, where an early part of the Roman Empire is known to have once stood. Further interest lies around the Konak Square, where the clock tower has become something of an iconic symbol of the city. Konak Pier is a good place for shopping, while sightseers really should pay a visit to the hilltop castle of Kadifekale. 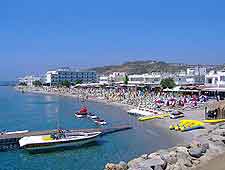 Kos is an especially famous Greek island and is surprisingly close to Bodrum, being located to the south-west. The beaches of Kos really are the number one reason why this island is such a tourist hotspot and for the most gorgeous beaches, you will need to head to Kefalos Bay, where both Langada Beach and Paradise Beach stand out. Away from the coastline are a number of attractive mountain villages, such as Agios Dimitrios, Lagoudi, Pyli and Zipari. 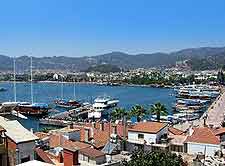 Marmaris is to be found directly to the south-east of Bodrum and is linked by frequent 'dolmus' minibuses. Many bustling beaches are spread around the coastline of Marmaris, often being edged with eateries, bars and shops. The nightlife of Marmaris is another leading attraction, with nightclubs being especially concentrated along the Bar Street. Excursions to the neighbouring towns of both Icemeler and Turnc are recommended, along with a visit to the ancient castle, which was built in the early part of the 16th century and is therefore around 500 years old, although it is reputed that a castle has stood in the coastal town ever since 3000 BC.

The charming town of Milas is just 50 km / 31 miles to the north-east of Bodrum and easily reached using minibuses. Part of Turkey's Mugla Province and once the actual capital of Caria, Milas is famed for its beautiful Turkish carpets and ancient attractions. Look out for the Baltali Kapi gateway, the 14th-century Becinkalesi fortifications, and the remains of the Temple of Zeus Osogoa, with 14 historic temple columns still being clearly visible today. The shopping scene in Milas is also especially well developed. 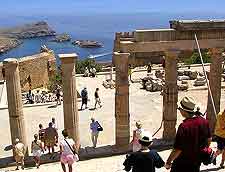 Rhodes may be a fair distance to the south-west of Bodrum, but is can be reached if you are prepared to travel and really is worth the effort. With in excess of 300 sunny days each year, sunshine is virtually guaranteed on Rhodes, meaning that sightseeing is always a pleasant and enjoyable pastime. Water sports and similar attractions are big business on Rhodes and visitors often enjoy spectacular scuba diving, with three separate dive schools being found around Mandraki Harbour. The Ancient Ruins of Kamiros City are the most historic of all the archaeological sites on Rhodes and originate from the 7th century BC.

Yalikavak is one of a number of appealing resort towns located around the north-easterly side of the Bodrum Peninsula and is actually just 18 km / 11 miles away, being easily reached in 20 minutes or so. The coastal attractions of Yalikavak serve as the main draw card, together with many characterful windmills from the past.