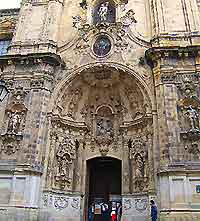 Unique in many ways, the coastal city of San Sebastian has risen from a modest fishing village to a trendy international getaway. It is now the capital of the Spanish province of Gipuzkoa, one of the Basque country's autonomous enclaves.

Just a few miles from the border with France, San Sebastian offers a modern and interesting history. Much of the city's rich heritage has been shaped by the preference of Spanish royalty, its elegant Belle Epoque downtown district, and a number of major international cultural events.

Named after the monastery of San Sebastian, the history of this well-placed settlement on the Bay of Biscay began in 1181, when it was given self-governing status by King Sancho VI Garcés of Pamplona. At the turn of the 13th century, the town was taken by the King of Castile, Alfonso VIII. He allowed the autonomous charter to continue, and soon the town saw an influx of Gascon-speaking colonisers. This migration left a permanent imprint on San Sebastian's character.


The Kingdom of Navarre

In 1265, San Sebastian was given to the King of Navarre as part of a wedding dowry. This gave the kingdom a much-needed seaport, and soon trade flourished with Gascony and other European ports. The main exports were various Castilian products, along with whaling related goods and cod caught by local fishermen.

In addition to its excellent natural harbour, the city is protected by a series of hills. The Kingdom of Navarre recognised the defensive potential of these hills, building a fortress atop Mount Urgull. During the 15th and 16th centuries, the history of San Sebastian was punctuated by a number of sieges and battles.

When the Kingdom of Navarre fell in the year of 1521, the town sided with Spain in the running conflict with France. After enjoying a fairly calm 17th century, history thrust San Sebastian back into the fire when the French Duke of Berwick took over the town in the early years of the 1720s. This occupation lasted only three years, but the shelling destroyed many buildings. Reconstruction work saw the arrival of the Konstituzio Plaza in the heart of today's San Sebastian. 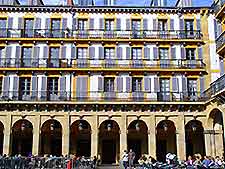 During the Peninsular War, San Sebastian took a serious beating. Napoleon's troops laid siege to the town in 1808. A force of Anglo-Portuguese troops arrived just five years later and an intense battle ensued, resulting in most of the town being burned to the ground. Only one street, the 31 August Street as it is known today, survived this episode. When the city was rebuilt, it was done so from stone instead of timber.

During the 19th century, San Sebastian became a popular spot for Spanish royalty escaping the summer heat of central Spain. The defending walls and fortifications were demolished in the early 1860s and the city embarked on a new direction as a centre for culture instead of war.

Much of the city centre was built in the classical European style of the period, leaving behind a wealth of Art Nouveau buildings to match its swanky Concha promenade. The shipyards were moved elsewhere to transform the beachfront into a place of leisure rather than commerce. This was the turning point in the history of San Sebastian, as it had been tapped as a hot spot to holiday by Spain's elite.

This trend continued unabated over the next century. In the 1990s, San Sebastian got another makeover, enhancing the neoclassical and modernist face of the city centre. The Kursaal Palace was erected as recently as 1999, along with the expansion of Zurriola Beach and its promenade. Today, the city hosts a number of important events, such as the San Sebastian International Film Festival. It remains one of the Basque country's most cosmopolitan and classy destinations.