Capital of Italy's famous Tuscany region, the city of Florence is famous for being the home of Italian Renaissance and some of Italy's most esteemed architecture. The city resides within the province of the same name and enjoys annual tourism numbers in their millions.

When you first arrive in Florence, a number of local sights serve as useful points of reference. The Santa Maria Novella railway station (Stazione di Santa Maria Novella) is one such landmark and from here, the Duomo cathedral is roughly just a ten-minute walk away, via the Via de' Panzani and the Via de' Cerretani.

Once you are at the Duomo itself, the adjacent Piazza di San Giovanni connects the Via Roma, which in turn leads to the Piazza della Repubblica, the Via Calimala, the Via Por Santa Maria and finally the Ponte Vecchio. Alternatively, from the Florence Duomo, take a stroll along the Via de' Calzaiuoli in order to reach the Piazza della Signoria, which serves as the historical Italian seat of government. From here, the Uffizo Gallery is an additional attraction, as are the views across the River Arno.

For maps of Florence, check out the tourist offices at the Amerigo Vespucci Airport, at the Santa Maria Novella train station, on the Borgo Santa Croce, on the Piazza della Stazione and on the Via Cavour. 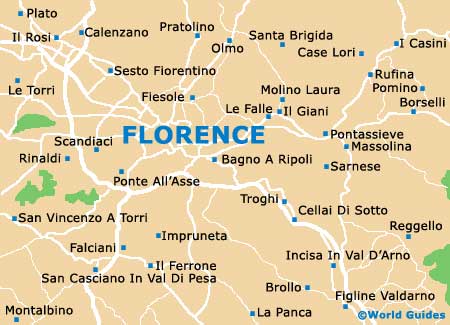