The city of Florence is one with great character and history, being exactly what people first picture when they think of Tuscany and its most famous landmarks. Some superb structures reside within the city, such as the towering Campanile di Giotto, a bell tower so tall that when its bells rang, they could be heard from a great distance, either announcing the time of Sunday mass or warning locals of possible danger.

Another familiar sight on postcards of Florence is the Ponte Vecchio, a beautiful and somewhat iconic medieval bridge spanning the narrowest section of the River Arno. Situated just above the buildings on the bridge is a small and once secret corridor, which connects the Pitti Palace with the Uffizi Gallery and was originally created so that members of the powerful Medici family could walk into the city unnoticed, without being bothered by locals and the less fortunate. Today, the passageway is open to everyone and is used to display some interesting portraits of renowned Italian artists.

Sightseers looking for landmarks in Florence may be keen to pay a visit to the Casa Buonarroti, to learn of its Michelangelo heritage. The Fortezza da Basso may also be of interest and this massive fortress was designed by architect Antonio da Sangallo the Young. 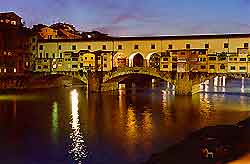 The Ponte Vecchio is unusually lined with shops along both sides, such as art galleries and jewellery stores. When you visit this old bridge, look out for the backs of the shops, which have been extended to gain more space and now appear to precariously hang above the river, being held in place by simple wooden supports. It is believed that a bridge has stood here since the days of the Romans, although this particular structure dates back to 1345. The bridge comprises three arches, with the central arch being some 30 metres / 98 feet wide, while the arches either side are slightly narrower.

Address: Via Ghibellina 70, Florence
Tel: +39 (0) 55 241 752
The Buonarroti House is an important local landmark and was actually once the property of famed Italian Renaissance artist Michelangelo, although it is widely acknowledged that he never actually lived here. Bequeathed to the nephew of the artist, Lionardo Buonarroti, the house was later converted to a museum-type attraction with just over 20 rooms open to the general public. The casa now honours the life and achievements of Michelangelo, with highlights including early sculptures, frescoes and other art works, along with an extensive library, family archives and a number of personal artefacts.
Open hours: Wednesday to Monday - 09:30 to 14:00
Admission: charge

Address: Arsenale, Viale Filippo Strozzi 1, Florence
Tel: +39 (0) 55 49721
The exterior wall of this vast fortress is still intact and the building is of great importance in the history of Tuscan military architecture. Constructed in a pentagonal style, the Fortezza was built almost 500 years ago. It soon became obsolete and started to symbolise the end of the city being attacked, which is why it has been preserved so well. Over the years it has been used as a prison, an arsenal and army barracks. In 1978 a huge steel building, covered in aluminium, was built inside the wall as an international exhibition centre and now hosts many popular events, including the large international market show of jewellers and prestigious Pitti fashion shows. There are also some attractive gardens, which have been well laid out. 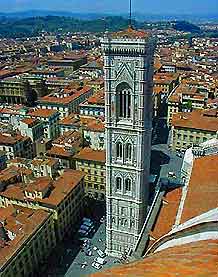 Address: Piazza Duomo, Florence
Tel: +39 (0) 55 230 2885
This freestanding Gothic bell tower measures in at almost 85 metres / 279 feet in height and is generally regarded as ranking amongst Italy's finest. Part of the Florence Cathedral complex, the Campanile di Giotto is located alongside the Basilica di Santa Maria del Fiore, as well as the Battistero di San Giovanni, where it has stood since being built between 1334 and 1359. Of interest, construction slowed down due to the death of the original architect in 1337, and again when the Black Death plague arrived in 1348. Visitors may like to climb the 414 steps to the top of this landmark to enjoy some superb views of the cityscape, with strategically positioned platforms being found along the way should you need a rest. All of the art works within the campanile are actually replicas, since the originals were removed in the 1960s and are now housed within the Museo dell'Opera del Duomo.
Open hours: daily, May to October - 09:00 to 18:50; November to April - 09:00 to 16:20
Admission: charge

Address: Piazza Santo Spirito 5, Florence
Tel: +39 (0) 55 287 043
With a large archaeological collection full of interesting artefacts, which were originally donated to the monks of the old San Romano, all that survives of this monastery is the refectory (cenacolo), which is now a small museum. Highlights include a ruined, detailed fresco showing the last supper, and a collection of 11th-century Romanesque sculptures.
Open hours: Tuesday to Sunday - 10:30 to 13:00
Admission: charge