Florence is a city of history and steeped in quality tourist attractions from previous centuries. When you first arrive in Florence, consider joining a guided tour of the city, so that you quickly get your bearings and understand the layout. Guided tours will take you past all of the main sights and attractions, either on foot or onboard a comfortable air-conditioned bus.

Simply strolling in the city centre and through the Piazza del Signoria is a real highlight for most tourists, and around almost every corner is another beautiful traditional Tuscan building to savour. Highly recommended attractions in Florence include the grand palaces best known as the Palazzo Medici-Riccardi, the Palazzo Strozzi and the Palazzo dei Congressi, while those arriving by train will also likely find the Stazione Centrale (Santa Maria Novella railway station) a particularly impressive building.

Guided bus tours operate daily in Florence, departing from the Piazza Santa Maria Novella. English speaking guides are on board the bus and time is allowed for walking around at some of the stops to take in the beautiful surroundings.

Daily walking tours are available with English speaking guides. Lasting approximately 3 hours, they depart from the Piazza Santa Maria Novella and take in many of the city's most interesting attractions and landmarks, ending at the Piazza della Repubblica. 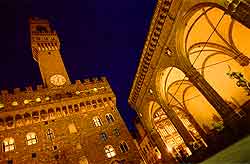 Address: Piazza della Signoria, Florence
The Palazzo Vecchio was completed in 1322 and it still serves its original role as Florence's town hall. The tall and imposing bell tower was built to announce city meetings or to warn of flood, fire or enemy attack. Much of the interior was remodelled when Duke Cosimo I moved into the palace in 1540, although it still retains a fairly medieval appearance. Both Leonardo da Vinci and Michelango were approached to redecorate, but it was Vasari who finally undertook the work, creating many elaborate features.

The Piazza del Signoria is a truly unique outdoor sculpture gallery and a cultural centre of Florence, surrounded by some of the city's most celebrated buildings. It has been at the heart of the city's politics since the 14th century and the many striking statues commemorate important events in the city's history.

Address: Via Cavour 11, Florence
This town mansion on Via Cavour was built for Cosimo I Vecchio by Michelozzo over 500 years ago and its famous classical Renaissance facade has served as a model for many other well-known Italian palaces. Over the years the palace has been host to countless famous individuals, including royalty and artists. The palace was the residence of the powerful Medici family until 1540, when Cosimo I moved into the Palazzo Vecchio. Across the road are the stunning Medici Chapels, built to serve as mausoleums to this family, showing their immense wealth and influence.

Address: Piazza Degli Strozzi, Florence
This striking Renaissance palace is one of the most magnificent palaces in the city. Construction began in 1489 for wealthy banker Filippo Strozzi, who sadly died two years later, after only the foundations had been laid. The sheer size of the Palazzo Strozzi is simply immense and 15 buildings were demolished to make room for it. Building was finally completed in 1536 and although it only has three storeys, each floor is as tall as a normal palazzo. Today, the palace is used for art exhibitions and also houses various institutes and a large library.

Address: 16, Corso Italia, Florence
Near to the Piazza Vittorio Veneto is the Teatro Comunale, the most important concert hall in the city. Over the years, countless famous names have performed on the stage, such as Maria Callas, Pietro Mascagni, Richard Strauss, Igor Stravinsky, Luciano Berio and many others. Originally the Politeama Fiorentino, an open-air amphitheatre, the existing building was designed by Telemaco Bonaiuti in 1862 and the main theatre area can seat around 2,000 people. There are many concerts, operas, festivals and events held in this theatre throughout the year, including the famous Maggio Musicale Fiorentino.

Address: Piazza de' Pitti, Florence
The Palazzo Pitti is situated on the southern bank of the River Arno and was designed for the Pitt family by Brunelleschi. This huge palace is quite imposing and features some wonderful pieces of art by Raphael, Filippo Lippi, Tintoretto, Veronese and Rubens - all displayed in beautifully decorated rooms. The palace is also home to a modern art collection and a costume collection. Outside to the rear is the stunning landscaped Boboli Gardens, with ponds, fountains and formal clipped hedges. This is one of the top tourist attractions in this part of Florence.

Address: 14 Viale Filippo Strozzi, Florence
Housed in the 18th-century Villa Vittoria, which was built by the Strozzi family, the Palazzo dei Congressi has become the best exhibition and modern international conference centre in Florence. Situated next to the Santa Maria Novella, the Villa Vittoria offers superb facilities for large events and has 13 rooms and an open-air amphitheatre. Outside there are also beautifully landscaped gardens.

Address: Piazza di Santa Maria Novella, Florence
Opened in 1935, the Santa Maria Novella (SMN) railway station is part of the major Italian north-south train network and high-speed trains run regularly between Milan and Rome, stopping in Florence. The station features a large atrium covered by a glass cascade and is one of Italy's most important landmarks in modern architecture. It was built outside the beautiful Santa Maria Novella church, which is where its name originates.