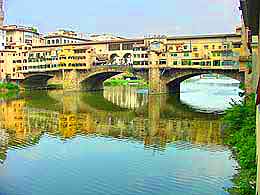 Florence was settled as early as the prehistoric period of history. However, the origins of the present-day city date to its foundation as one of Julius Caesar's colonies in 59 BC.

The Roman city had towered gates, a forum, various temples and communal baths. The River Arno was beyond the city walls at this time. Florence's strategic position at the narrowest crossing of the River Arno favoured rapid development. Indeed, it soon came to replace Arezzo as the main city in northern Etruria. In the 2nd century AD, Christianity was introduced into the city. Early churches include San Lorenzo, which was consecrated in 393 AD.

From the 5th century AD, Florence became tied up in political turmoil and violence. For many years, it was hotly contested by both the Goths and the Byzantines. In the mid-6th century, new city walls were built. Its rather modest size tells us a lot about the decline of the city after the departure of the Romans.


By the late 6th century AD, Florence had been conquered by the Lombards. This was one of the darkest periods in the city's history. Cut off from the main trading routes that linked it with Bologna and Pistoia, Florence was especially vulnerable to attack. In the 8th century AD, a feudal system was put in place here and the city became a part of the Holy Roman Empire. This was a time of revival. Projects included the rebuilding of a bridge and the construction of new fortified defensive walls. 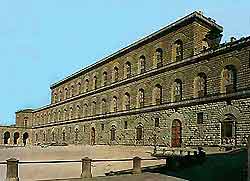 History from the Middle Ages

In the 11th century, Florence rose in status. It hosted a council under Pope Victor II, which was also attended by Emperor Henry III and more than 100 bishops. Many of its ancient buildings were renovated, including the Cathedral of Santa Reparata.

The Middle Ages in Florence were marked by internal turmoil and rivalry between two factions, namely the Guelphs and the Ghibellines. Much blood flowed and defensive towers soon rose up as rival families sought to protect themselves from enemies within the city walls.

Despite such troubled times, the city enjoyed something of an economic boom in this period. A wealthy merchant class grew up around a buoyant wool trade. At the end of the 14th century, the seeds of the Renaissance began to be sown in Florence. The city became the haunt of artists and intellectuals, and the Medici family rose to power as its leaders.

From the Renaissance to the Present Day

After the Renaissance, Florence was ruled by a succession of leaders, none of whom were particularly effective. Following the unification of Italy in the 19th century, the city was briefly made capital of the new state, until in 1870, it was replaced by Rome.

During World War Two history, Florence was occupied by German forces. Allied aerial bombardment destroyed many of the city's fine buildings. In August 1944, retreating German forces blew up all the bridges in the city, with the exception of the Ponte Vecchio.

In 1966, parts of Florence were flooded when the River Arno burst its banks. Countless art treasures and antique books were damaged. The disaster sparked off a worldwide rescue attempt, with volunteers coming to Florence from all over the world to lend a hand. In 1993, the Uffizi Gallery (Galleria degli Uffizi) was sadly the focus of a car bomb attack, which killed several people and damaged the museum. It is believed that the Mafia was responsible for the incident.