Day trips around Tuscany are popular with those based in Florence and the city is within easy reach of many magnificent attractions. Especially close by is the small town of Fiesole, which boasts an elevated setting and great panoramas. Notable highlights in Fiesole include the remains of Etruscan walls and Roman baths, together with a very well-preserved Roman amphitheatre, which is still used today.

Slightly closer to Florence are the famous Medici villas, which comprise a number of rural buildings once owned by the wealthy Medici family between the 15th and 17th centuries, clearly displaying their affluence and importance. Also popular are excursions to the various attractions throughout the Mugello region and to the Tuscan city of Prato, where 'cantucci' biscuits have become something of a local speciality. 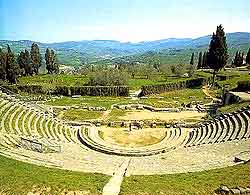 Address: 8 km / 5 miles north of Florence
The beautiful town of Fiesole has a rich history and a strong Etruscan, Roman and Renaissance past. With many winding streets and plenty of picnic spots, Fiesole has become a popular summer retreat and features many attractions, such as an impressive art museum and also an archaeological site with includes an Etruscan temple and a Roman theatre. The town is situated in the picturesque valleys between the Mugnone and Arno rivers and affords some truly stunning views of Florence.

Address: 3.5 km / 2 miles north of Florence
During the 15th and 16th centuries, several luxurious villas were built by the Medicis throughout the countryside around Florence and these beautiful buildings are well worth visiting. The finest is probably the Villa della Petraia, which has some splendid gardens and was commissioned in 1576 by Cardinal Ferdinand de' Medici. Further north is the Villa di Castello which used to be the summer retreat of Lorenzo the Magnificent.

Address: north-east of Florence
The Mugello region is home to some of the most unique villages in Tuscany and highlights include the Montesenario Convent and the wine town of Rufina, with an interesting viticulture museum. This scenic village is popular with walkers, trekkers, horse riders and also climbers. There is a giant statue of the mountain god, Appennino, which was carved in 1580, a large valley full of grape vines and the River Sieve winding through it is often a frequented by canoeists.

Address: 17 km / 10 miles north-west of Florence
Founded by the Ligurians, Prato was later taken over by the Etruscans and the Romans. Over 900 years ago Prato was an important producer of high-quality wool and today is one of Italy's major textile producers. Highlights include a central walled ancient city, several palaces, a magnificent municipal art gallery, a 13th-century castle and a large and very imposing cathedral.