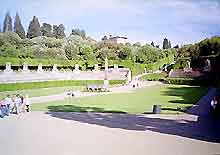 Florence, Italy can really boast about its wide variety of parks, ranging from the largest to the smallest, both private and public. You would never imagine that the city of Florence would have so much greenery - if you know where to look!

The Florence, Italy parks and gardens include many that were the former private gardens and parklands of the city's nobility and whether it is just a small square with surrounding trees or a larger open space, they are all peaceful places to relax.

Address: Via Micheli 3, Florence
Tel: +39 (0) 55 275 7402
These beautiful gardens were laid out in 1545 on the site of a botanical garden. The word 'semplici' refers to the raw ingredients (simples) used in medieval times in preparing medicines. They contain a wide variety of mature plants, including Tuscan flora, azaleas, irises, water plants, large coniferous trees, yews, cork trees and medicinal herbs, which have been extensively studied here. There are several greenhouses full with tropical plants, palms, ferns, orchids and large citrus trees and also some small specialist museums, such as the geology museum, with a collection of fossils and minerals, and the botanical museum, with specimens of rare plants.
Open hours: Monday to Friday - 14:30 to 17:00
Admission: charge 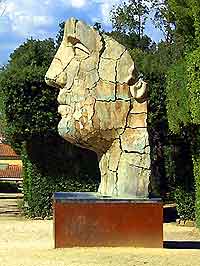 Address: Piazza de' Pitti, Florence
Tel: +39 (0) 55 213 440
The Boboli Gardens were laid out for the Medici after they purchased the Palazzo Pitti in 1549. First opened to the public in 1766, they are a splendid example of Renaissance gardening. Much of the gardens are formal in design and consist of box hedges, neatly clipped into geometric patterns. More natural areas are nearby, with groves of holly and cypress trees, planted to create a contrast in design. Highlights include the Kaffeehaus (coffee house) Rococo-style pavilion built in 1766, La Grotta Grande built in 1583, with casts of Michelangelo's Quattro Prigioni, the L'Islotto (Little Island) in the centre of the moated garden and also the Orangery, which was built in 1785 and houses many large, tender plants. Throughout the gardens there are many statues and the vistas were thoughtfully planned to give some of the best views across Florence.
Open hours: 09:00 to one hour before sunset, June to September - 09:00 to 19:30
Closed: 1st and 4th Monday each month
Admission: charge

Address: Piazza di San Lorenzo, Florence
Tel: +39 (0) 55 216 634
Within the grounds of this ancient church is a small walled, open area, which is home to the formal cloister garden. Although small, this peaceful garden is well planted with clipped box hedges, pomegranates and orange trees. There is also plenty to see inside the church, which was rebuilt in 1419 and is full of history.
Open hours: daily - 07:00 to 12:00, 15:30 to 18:30
Closed: 1st, 3rd and 5th Monday of each month
Admission: charge

Address: Albrese
If you are looking for an excursion outside the city, this vast park stretches for some 20 km / 12 miles north from the little fishing village of Talamone. It was been designated as a nature reserve in 1975 and this means that hunting is forbidden and that cars are not allowed within the confines of the park. This is part of the park's attraction, since it is rarely crowded and full of wildlife. Birds include herons, storks, stilts, many varieties of duck and even flamingos can be seen here in the lagoons, which can be explored by canoe. There are four trails for those who want to explore the park and these are marked on a map which is provided when the entrance permit is purchased in Albrese. There are also some popular beaches nearby, sheltered by parasol pines.
Open hours: Wednesday, Saturday, Sunday and national holidays - 09:00 to one hour before sunset
Admission: charge

Address: Collodi
Situated some 15 km / 9 miles east of Lucca, the old castle of Collodi was purchased by the Garzoni family in the early 17th century and converted into a magnificent villa. In 1786, the garden was laid out in a baroque style and is full of statues, fountains, topiary and features a dramatic series of staircase terraces which are built on a hillside.
Open hours: daily - summer 08:00 to sunset, winter - 08:00 to 16:30
Admission: charge

Address: north-western suburbs of Florence
The two Medici villas stand almost next to each other and are easily reached by bus, which takes around 15 minutes from the main bus station. The gardens of the Villa Medicea La Petraia are laid out with box hedges enclosing colourful flower beds and there is also an extensive wild woodland area at the rear of the villa, where you can wonder freely. The gardens of nearby Villa Medicea di Castello were laid out for Cosimo I in 1541 and feature a shell-encrusted grotto.
Open hours: 09:00 to dusk
Admission: charge