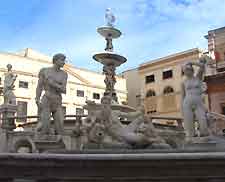 The island's history stretches back to the 8th century BC. This is the date that a group of people known as the Sikanians first started to colonise this part of the island of Sicily. Their rock art decorates a cave wall in Addaura. They were later overtaken by the Phoenicians, who founded a settlement here known as 'Ziz' and which later grew to become Palermo.

In the 3rd century BC, after a long struggle between Rome and Carthage, Rome finally won the day. The ancient city of Paleopolis, as it was then known, grew under the Romans to become a major trading port. They built roads, temples and baths here. From the 7th century AD, Palermo became part of the Byzantine Empire. It had endured many years of constant attacks by Barbarians.

In 831 AD, Palermo experienced another change of regime. This time a North African group of people, the Saracens, seized the island, including Palermo. They renamed the city 'Balharm' and ushered in a period of prosperity that extended to the city's art and architecture. Many of its mosques, gardens and palaces date to this period of its history. Balharm also served as the capital of Arab Sicily.


Medieval Times on the Island

Arab rule ended in the late 11th century, when Norman forces succeeded in laying siege to the city, eventually taking control. Surviving monuments from this time, such as the Palatine Chapel and the Cathedral, clearly show that medieval Palermo was a meeting point for both Arab and also Norman culture.

Under the rule of King Frederick II von Hohenstaufen, Palermo's reputation as a city for the advancement of art and literature grew even further. It culminated in the establishment of the Sicilian School of Poets.

From the beginning of the 15th century until 1700, Palermo came under Spanish dominion. This was a relatively peaceful period during which it became the capital of Sicily. Many new buildings were constructed, including churches. However, whilst the Catholic clergy prospered, it wasn't quite the same story for the city's poor.

After a brief period from 1718 to 1735 when Palermo was under Austrian control, the city again fell to the Spanish and became an autonomous state. Bourbon suggestions that Palermo should give up its independent status were met with uproar. In 1820 and again in 1848, the city rose up in rebellion. Finally, in 1860, the city won its freedom and it was later annexed to the Kingdom of Italy.

During World War Two, Palermo was heavily bombed by Allied forces. In 1946, the city was named as the seat of the regional parliament. Post-war unrest led to the growth of an underground movement known as the 'Mafia' or 'Cosa Nostra'. Today, Palermo is struggling to recover from many social and urban problems, including poverty and rampant urban growth.