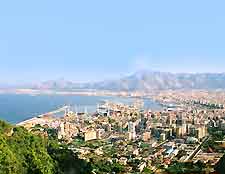 Palermo is located on the north-western coast of the island of Sicily.

There was a time when each of Palermo's central neighbourhoods and districts had a very distinct character, often with its own traditions, markets and even dialects.

Of course, today's visitors will find that Palermo is a good deal more unified. Nevertheless, its various districts still remain an important part of the city's makeup. In particular, the city boasts a notable medieval quarter that is reputed to be one of the largest in Italy. 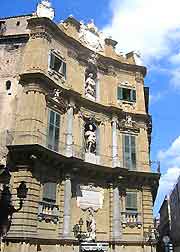 The Quattro Canti, or 'Four Corners' district of Palermo, is the traditional heart of the historic city. It is located at the crossroads of the Corso Vittorio Emanuele and Via Maqueda and essentially marks out the four original quarters of Palermo - Albergheria, Capo, Vucciria and La Kalsa. Many of the city's most famous historic monuments, including the Royal Palace and other leading tourist attractions, can be found here.

La Kalsa is the medieval Arabic district of Palermo. Built during the Muslim occupation of Sicily, La Kalsa was once fortified and served as the home of the Emir. After many years of neglect, this neighbourhood has recently been brought back to life, becoming a popular place to visit. The heart of La Kalsa district is around Piazza Kalsa, but this area also includes Corso Vittorio Emanuele, Foro Italico and Via Lincoln. Although La Kalsa was heavily bombed during the Second World War, it is still remarkable for its historic buildings, including the Basilica of the Holy Trinity, Piazza Marini, Church of Santa Maria della Catena, and Palermo's historic botanical gardens. The neighbourhood is equally renowned for its traditional restaurants and food stalls.

Albergheria lies between Via Maqueda, Corso Vittorio Emanuele and Corso Re Ruggero. Whilst this historic neighbourhood is still waiting for the restoration needed to make it a more popular tourist destination, it still has plenty to admire, including its palaces, old churches and winding alleyways. At the centre of the neighbourhood is Albergheria's open-air market.

North of Albergheria is the district of Il Capo. Like the other historic quarters of Palermo, Il Capo is home to a large number of palaces, as well as quaint, winding streets and squares in which to sit and watch the world go by.

To the north La Kalsa is La Vucciria. Bordered to the east by Palermo's harbour, La Cala, this neighbourhood has a great deal to offer visitors. As well as an open-air market, the La Vucciria district boasts many monuments and other historic attractions.

Located to the west of Palermo, the suburban Calatafimi district is notably home to the Zisa Palace, Capuchin Catacombs and Carthaginian Cemetery.

North of the historic district lies the more modern face of Palermo. This neighbourhood includes the vast Piazza Politeama. North of this square is reputedly the city's most exclusive street, the Viale della Libertà.