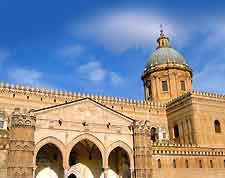 With architectural and cultural influences from North Africa, Italy, Spain and Greece, Palermo can boast a large number of tourist attractions.

Indeed, the historic district of Palermo can be considered as unique, its architectural heritage and historic attractions having survived a record number of invasions over the years.

Tourists to Palermo who are expecting to see richly decorated palaces and similar attractions will certainly not be disappointed. Nor will those who wish to include historic religious buildings on their sightseeing itineraries. 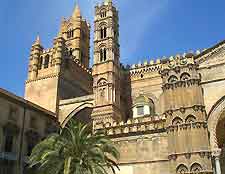 Address: Piazza della Cattedrale, Palermo, IT-90100, Italy, IT
Tel: +39 091 334 376
Palermo's magnificent cathedral (cattedrale), more properly known as the Cathedral of Santa Maria Assunta, is distinctive for its mix of architectural styles and for its sheer size. Built in the Norman-Arab fashion, there have been many later additions and alternations. It's well worth taking a trip down into the crypt and treasury to see various precious objects and attractions, the star of which has to be a golden tiara which once belonged to Queen Constanza. Among the people buried in the cathedral's crypt are Roger II, Henry VI of Hohenstaufen, Constanza de Hauteville and Frederick II of Hohenstaufen. Palermo's Cathedral also has a heliometer, a sort of solar observatory, that was built in the 17th century and which enables an image of the sun to be projected on the floor at solar noon.
Open hours: daily - 09:00 to 17:30 (crypt), 09:30 to 17:30 (cathedral)
Admission: charge 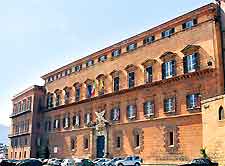 Address: Piazza Indipendenza, Palermo, IT-90129, Italy, IT
Tel: +39 091 705 4317
The origins of the Palazzo dei Normanni go back to the 9th century, when the Saracen Emir of Palermo put down the first foundations. Later additions were made by Sicily's Norman kings, including Roger II, in the 12th century. Even more renovations took place under the Spanish Bourbons. Once a royal residence, this imposing building is now home to the Sicilian Regional Assembly.
Open hours: Monday, Friday and Saturday - 09:00 to 12:00
Admission: charge

Address: Piazza Indipendenza, Palermo, Italy, IT
Tel: +39 091 705 4749
The Palatine Chapel is Palermo's top tourist attraction and remains busy throughout the year. This means that visitors may have to queue for a little while, although any wait is more than amply rewarded. Built within the Palazzo dei Normanni, the Chapel's interior is quite stunning, with its distinctive Saracen arches and Byzantine mosaics.
Open hours: Monday to Saturday - 08:30 to 11:45 and 15:00 to 17:00, Sunday - 08:30 to 13:30
Admission: charge 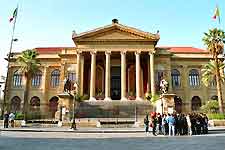 Address: Piazza Verdi, Palermo, Italy, IT
Tel: +39 091 605 3515
Built to celebrate the unification of Italy, Palermo's Teatro Massimo was extensively restored in 1997 and now holds regular performances, which delight both locals and visitors alike. Notably, the film 'The Godfather: Part III' was filmed in the theatre, amongst other attractions and crowd pleasers.
Open hours: Tuesday to Sunday - 10:00 to 15:30 (regular guided tours)
Admission: charge, discounts available

Address: Piazza Marina, Palermo, Italy, IT
Tel: +39 091 334 239
The palace, or Palazzo Steri as it's also known, was actually built as a castle back in the 14th century. Commissioned by the powerful Chiaramonte family, it was one of a number of such castles that were built during that period. In the early 17th century, the palace earned itself a rather dubious reputation when it became the headquarters of the Inquisition in Sicily. Square in appearance, with an interior courtyard, the palace is partly used by the University of Palermo, as well as being open to the general public.
Open hours: Monday to Friday - 09:00 to 13:00 and 15:00 to 18:00
Admission: charge

Address: Piazza di San Francesco d'Assisi, Palermo, Italy, IT
This medieval church was built in the Italian Romanesque Gothic Style, with a rose window and false arches featuring as its main architectural attractions. Today, an order of Franciscan monks still lives in the adjoining monastery. The Basilica of San Francesco d'Assisi itself often hosts music concerts, which are known to attract quite a crowd.
Open hours: Monday to Friday - 07:00 to 12:00 and 16:30 to 18:00,
Saturday - 09:00 to 12:00
Admission: free

Address: Piazza Guglielmo il Buono, 1, Palermo, Italy, IT
Tel: +39 091 652 0269
Zisa Castle, known in Palermo as the Castello della Zisa, is an impressive 12th-century construction that was heavily influenced by Moorish architecture. The home of the counts of Notabartolo di Sciara from the late 19th century to the 1950s, the castle eventually fell into disrepair until its restoration in the 1980s. Today, visitors can tour the castle and admire the rooms, which house Islamic art pieces and other local objects. The central hall is especially noteworthy, thanks to some rather fine mosaic decoration.
Open hours: Monday to Saturday - 09:00 - 18:30, Sunday - 09.00 - 13:30
Admission: charge