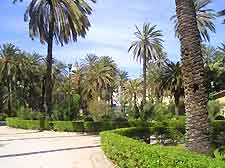 With its plentiful parks and gardens, Palermo was once known as the 'garden city' of Sicily. Today, Palermo still retains many of these green spaces. Whether you're looking for a quiet place to relax or somewhere to stroll and admire the scenery, Palermo has a great deal to offer.

The city's seafront is lined with parks and gardens, as well as grand buildings. Perhaps the most notable of Palermo's parks is the city's Botanical Garden. It is well worth a visit, particularly on a hot summer's day when the shade is very welcome to local workers and their families, as well as visitors to the city. 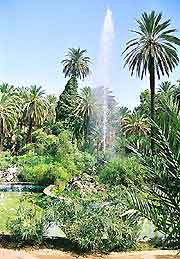 Address: Foro Italica / Via Lincoln, Palermo, Italy, IT
The geometric layout of this 18th-century garden is rather like a patchwork quilt. Visitors enter the Villa Giulia gardens via an impressive neoclassical entrance close to the Foro Italica. At the centre of the garden is a marble fountain complete with several sundials. A small artificial hill was added to the gardens in the 19th century, along with fake Roman ruins and, in common with many of the city's other gardens, several busts of famous Sicilians.
Open hours: daily
Admission: free

Address: Via Lincoln 2B, Palermo, Italy, IT
Tel: +39 091 623 8241
Palermo's Botanical Garden was laid out in the late 18th century. Within this lush oasis, visitors will find a rich variety of exotic plants and flowers, including bamboo, palms, coffee plants, papaya, cotton, as well as a large cactus collection. Indeed, the garden is widely recognized as one of the finest in Europe, with many of its species sourced from all over the world. As part of the University of Palermo, this garden is also one of the oldest centres for botanical studies in the Mediterranean region. The main entrance is located on Via Lincoln.
Open hours: Monday to Friday, November to March - 09:00 to 17:00; April to October - 09:00 to 18:00; Saturday and Sunday - 08:30 to 13:30
Admission: charge, discount available for children

Heavily bombed during World War Two, the Piazza Magione was left derelict and then used as a car park for many years. Finally, in the 1990s, it was transformed into a large grassy square. Planted with trees, it has become a popular play area for local neighbourhood children and occasionally hosts concerts during the hot summer months.
Open hours: daily
Admission: free

Address: Piazza Marina, Palermo, Italy, IT
The Garibaldi Gardens occupy a large part of a vast open area on Piazza Marina and are set amidst some of Palermo's best-known historic buildings. Built in 1860, visitors today can enjoy strolling along its various paths, looking at the busts of famous Italian Risorgimento figures and admiring the fountains. Children will no doubt enjoy the public play area, which is situated within the gardens of Villa Garibaldi. A children's library is also based there.
Open hours: daily
Admission: free

Favorita Park (Parco della Favorita) was built at the end of the 18th century by King Ferdinand III of the Bourbons. It is located on the outskirts of Palermo itself and was originally intended to be used as royal hunting grounds. The miniature Chinese Palace was added later and can still be found there today. The park covers a vast area and as visitors wander along its many tree-lined paths and avenues, it's possible to admire many exotic plants as well as statues and fountains.
Open hours: daily
Admission: free

Address: Via Libertà, Palermo, Italy, IT
Palermo's English Garden was originally laid out back in the mid-19th century. As well as having an English influence, an Arab temple, fountains, greenhouses, sculptures and busts of famous Sicilian personages grace the garden. A statue dedicated to that famous Italian, Garibaldi, can also be found there.
Open hours: daily - 08:00 to 20:00
Admission: free