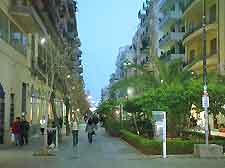 Whether you're looking for a gift to take home or chic fashion statement, then Palermo is a great place to spend time shopping. There is plenty of choice of handcrafted goods, including traditional Sicilian puppets, pottery and copper-crafted items.

Visitors will also enjoy browsing around some of Italy's most famous boutiques in Palermo, including Dolce and Gabbana and Luis Vuitton, enjoying a spot of serious window shopping. With some of the most colourful markets in the region, it's also worth setting aside plenty of time to savour the sights and sounds of at least a few of the Palmero's bustling markets, where local Italian produce is sold. 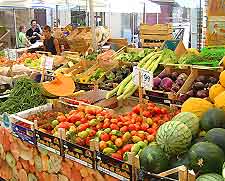 Generally, shops in Palermo open between 09:00 and 13:00, close for lunch and then reopen from 15:30 to 19:30. Saturday opening hours can vary slightly, opening and closing half an hour later in the afternoon. With the exception of food shops, the majority of Palermo's shops are closed on Monday mornings, so this is not a good time to head out to do some shopping. Food shops tend to close after lunch on Wednesdays.

Markets are generally open from Monday to Saturday until 14:00. However, the best time to pick up the best of fresh produce and to really savour the markets' vibrant atmosphere is before 10:00.

Most upmarket shops in Palermo can generally be found in the more modern part of town, north of the medieval centre. Good places to browse are along Via Libertà, as well as Via Roma and Via Maqueda. Window shopping can be carried out in more comfort along Palermo's main pedestrianised streets, including the Via Principe di Belmonte.

Markets are an important part of city life. Over the years, they have managed to retain their vibrant Arab atmosphere, and are busy places that make shopping a real experience for visitors to Palermo. The best-known market is La Vucciria, found off Via Roma, while the sprawling Mercato di Capo offers a huge choice of colourful clothing stalls. The Ballarò market can be found in the Albergheria district of Palermo, and although it mostly sells fish, fresh fruit and vegetables, there are also some clothes stalls.