Palermo Weather, When to Go and Climate Information

Thanks to its Mediterranean location, Palermo is blessed with a mild climate all year round.

This means that during the height of summer, Palermo enjoys mostly hot and humid weather with mild winters and very little rainfall.

Many tourists prefer to visit Palermo during the spring. At this time of year, temperatures can feel pleasantly warm and the city's major attractions are much less crowded. 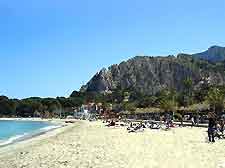 Late spring is often thought to be the best time to visit Palermo. During May and June, it's even warm enough to enjoy spending time on nearby beaches, but not too hot to spend time sightseeing in the old city of Palermo. Spring temperatures range between 10°C / 50°F and 18°C / 65°F.

The summer season is long, with the months of July and August tending to feature the hottest weather and driest climate. Temperatures in the summer are as high as 28°C / 82°F. If you're planning to do a lot of sightseeing in Palermo, rather than beach lounging, it's certainly worth avoiding this period if you can visit at another time of year.

Autumn tends to be the wettest time of the year. However, it has to be said that, even then, Palermo doesn't experience that much rainfall compared to other parts of Europe. Mild temperatures and plenty of sunny weather can still be had, if not necessarily guaranteed. Average temperatures range from 11°C / 52°F to 17°C / 63°F.

The winter months in Palermo offer a relatively mild climate and are quite short, lasting only between December and February. During that time, temperatures often don't fall below 10°C / 50°F. There are almost no frosts, making Palermo a popular place to escape cold winter weather in other parts of Italy and northern Europe.