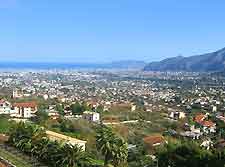 Sicily can quite rightly be described as a paradise for food and wine lovers. Visitors to Palermo will be delighted to discover a vast variety of cuisine available, not just in its restaurants, but also in bakeries and street stalls found throughout the city.

Mouth-watering local delicacies abound at countless eateries and dining venues all over the centre of Palermo and need not be expensive. Palermo's many restaurants range from upmarket establishments in historical buildings to more humble, but no less worthy, family-owned trattorias. 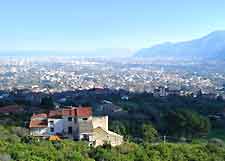 In Palermo, as in the rest of Sicily, lunch is served from around 13:00. Popular luncheon venues are the city's trattorias, informal restaurants which often only open at midday. Evening meals are served in pizzerias and restaurants, generally from around 20:00, although local people often prefer to dine later in the evening. It's worth noting that many of Palermo's eateries and trattorias close for one day a week, usually Sunday or Monday.

Palermo boasts some excellent bakeries where you can buy pastries and speciality breads. Also available are ice creams and, in the summer, flavoured ices known as granita. Other local specialties include cassata siciliana (ice cream with sponge cake, candied fruit and marzipan) and Iutta martorana.

Fast food delicacies in Palermo include chopped boiled octopus, known as purpu. Also on offer are freshly cooked artichokes, chickpea fritters known as panelle and pani cu'la meuza, a sort of bread roll stuffed with tripe or beef spleen. As you'd expect, pasta and seafood feature heavily on many restaurant menus and are always enjoyed by those dining out. These often include a typical Sicilian dish known as pasta con le sarde.

If you're short of time or don't want to interrupt your sightseeing, Palermo has a longstanding and popular street-food tradition. The most popular fast food in the city is a type of offal that is cooked and served in a bun. Likewise, Palermo's cafes and similar dining venues also offer a chance to have a light meal or inexpensive snack. Most of these can be found in the historic district.

If you have more time to spare and really want to soak up some traditional Sicilian atmosphere, then the small trattorias and authentic Italian restaurants within Palermo are popular places, generally serving tasty lunches that offer good value for money. However, sometimes they may only have a few tables. Menus usually include pizzas, as well as pasta, meat and fish dishes and, of course, antipasti.

More upmarket venues include Sant'Andrea, which boasts fine dining in beautiful surroundings. This restaurant has earned itself a Michelin star and provides the perfect atmosphere for a romantic meal out for two.