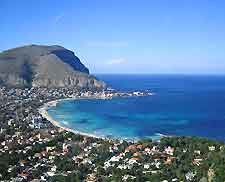 Located on the ever-popular island of Sicily, Palermo lies on the north-westerly coast and boasts a particularly large and important natural port, next to the Monte Pellegrino. With typical Mediterranean character and plenty of coastal appeal, Palermo dates back as far as the 8th century and is today known for many different things, such as its endless Norman buildings, magnificent palaces and lively local markets.

Take time to explore Palermo properly and wander through the winding streets throughout the city. The very heart of Palermo city is based around the Piazza Pretoria, while those in need of tourist information will find the main tourism office on the Piazza Castelnuovo, where a bi-monthly agenda is available. 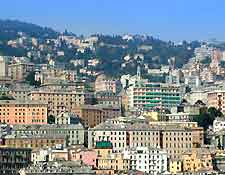 The historic centre of Palermo is the Quattro Canti district, which means the 'Four Corners'. A number of the city's most impressive attractions reside here, such as the Royal Palace.

Close by, a visit to the Cathedral of Santa Maria Assunta (Cattedrale) is quite overwhelming and the sheer size and detail of the architecture has to be seen in the flesh to be fully appreciated. Tourists should also look out for the medieval Basilica of San Francesco d'Assisi, the 12th-century Castello della Zisa (Zisa Castle) and the Teatro Massimo, a recently restored theatre offering regular performances. More information about Palermo Tourist Attractions. 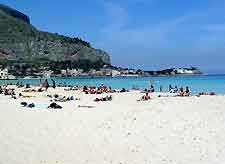 The Capuchin Catacombs are amongst Palermo's most unusual offerings and contain literally thousands of mummified bodies, while the Fontana Pretoria dominates the Piazza Pretoria and is known for its nude stone statues. Another important landmark in Palermo is the Porta Nuova gateway, which dates back to the 16th century and features enormous Hermes columns. Those looking for the best views across this part of Sicily should take a climb up the Monte Pellegrino, an imposing mountain that provides a scenic backdrop to parts of the city itself. More information about Palermo Landmarks. 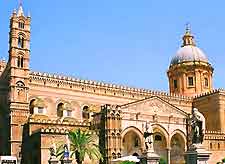 Palermo is a good place if you are interested in museums and historical information. You can learn more about the city's past at the Museo Archeologico Regionale (Palermo Archaeological Museum), where exhibits include a number of Greek and Roman treasures. The Museo Etnografico Pitrè (Museum of Ethnography) is also worth a look, as is the Galleria Regionale, where many masterpieces from as far back as medieval times are displayed. More information about Palermo Museums and Palermo Art Galleries. 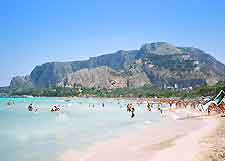 Close to many quality tourist attractions, Palermo is surrounded by picture-postcard Sicilian countryside. Mount Etna is especially close and this active volcano is a good place for a summer hike, and is even used by cross-country skiers during the winter months. The Riviera-style resort of Mondello is also nearby and is a must for those looking for luxury, pampering and sandy beaches. Directly south, Monreale is best known for its beautiful cathedral and views across Palermo itself. More information about Palermo Attractions Nearby.