Budapest Weather, When to Go and Climate Information 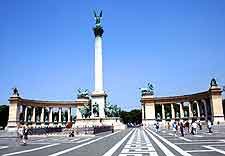 Budapest's weather is typically Hungarian, with a temperate climate. The winters in Budapest are cold and damp at times, while the summers are warm to hot, with extremely balmy evenings.

July and August both feature an almost identical climate and average temperatures hover around 26°C / 79°F, rising to well over 32°C / 90°F on the very sunniest of days. Hungary generally averages some of the highest levels of sunshine in Europe and Budapest is no exception to this, boasting in excess of 2,000 hours of sunshine in a year, with up to ten hours of sunshine a day. 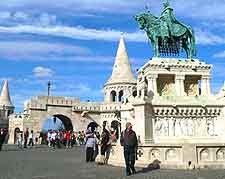 May and June are the wettest months of the year, featuring around 25 mm / 1 inch more rain than in July and August, although to put things into perspective, precipitation levels are still fairly low and rarely exceed 76 mm / 3 inches during these months. The summer climate is not generally humid and the highest levels of humidity in Budapest are usually experienced in January and February.

Both springtime and the autumn period are appealing times to visit Budapest, when the weather is still favourable and temperatures hover around 20°C / 68°F by day and rarely drop below 10°C / 50°F at night. Pollen levels are also lower for those who suffer from hay fever.

The Budapest Autumn Festival each October is a notable highlight and features a range of concerts, including performance by the acclaimed Hungarian Radio Symphony Orchestra. Similarly, even during the harshest December climate, the Christmas Fair at the Vörösmarty Square is always a joyous event and brimming with seasonal charm.