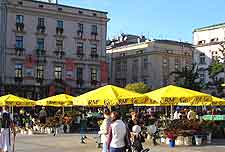 Although an eclectic mixture of traditional and more international restaurants is now present in Budapest, most tourists at least want to sample a dish or two of authentic Hungarian fare. Most of the restaurants in Budapest tend to open their doors from 10:00 or 11:00, remaining open throughout the day, and as late as midnight.

Evening dining tends to begin at around 21:00 and most restaurants are quickly in full swing soon after. The majority of medium-priced to expensive eateries around Budapest will usually require a reservation or a little good fortune if you simply turn up. 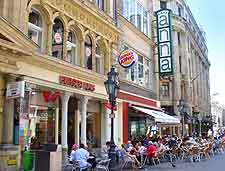 It is true that authentic Hungarian goulash (gulyás) is a popular winter meal, but many lighter dishes are available, such as chicken with paprika (paprikás csirke) and fish broth (halászlé), along with Adriatic seafood salads and tasty Balkan steaks. Most Budapest restaurants offer a fixed price lunch (prix-fixe), which generally offers good-value dining and features salads, soup, a choice of mains and several simple desserts, along with wine and often even caviar.

Most restaurants in Budapest are referred to as 'étterem' and are in their greatest numbers around District V (the city centre) and in particular, around the Barczy Istvan Utca, the Október 6 Utca, the Sas Utca, the Vaci Utca and the Vigyazo Ferenc Utca. A buzzing group of restaurants is also to be found along the Belgrad Rakpart, on the Pest side of the River Danube, and also on the Aulich Utca, close to the American Embassy and Freedom Square (Szabadsag Ter). 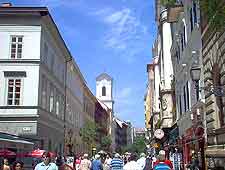 Pizzeria restaurants have never been more popular in Budapest and these are constantly appearing around the city, while the more old-fashioned self-service dining options are disappearing, being replaced with more modern international fast-food eateries. For self-caterers, Budapest contains some 20 different food markets, a large proportion of which are situated in Pest. However, the Fény Utca Market is located in Buda and lies alongside the Mammut shopping centre.

Pest has long featured a large number of traditional cafes and coffeehouses (kaveház), although a whole new generation of cafes have recently burst onto the Budapest dining scene. These trendy eateries often feature lots of chrome, fancy lighting and lively music, and offer an increasingly appealing alternative to Budapest's quieter restaurants. Most of these hip cafes are to be found along the IX Ráday Utca, the VI Liszt Ferenc Tér and the V Szent István Tér, near to the city's famous St. Stephen's Basilica.