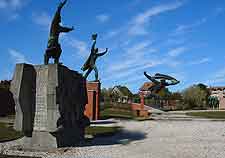 There is a vast amount of 'Hungary' surrounding Budapest and many neighbouring attractions are just begging to be explored. Numerous appealing Hungarian cities and towns reside around the Danube Bend, within the Great Plain and also in the Transdanubia area, and these attractions are often perfect for day trips or weekend breaks.

Szentendre is especially popular and easily reached in under 30 minutes, as is the town of Gödöllö. However, if you are looking for a truly memorable excursion close to Budapest, then consider spending some time at Memento Park, which has managed to salvage many spectacular statues from around the world's scrap heaps. 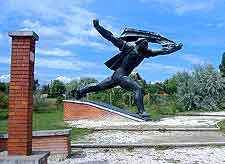 Address: corner of Balatoni Road and Szabadkai Street, Budapest, Hungary, HU
Tel: +36 (1) 424 7500
Website: www.mementopark.hu
Those travelling the 10 km / 6 miles outside of Budapest to reach Memento Park are in for a truly memorable excursion. Lying to the south-west and home to a total of over 40 different statues and busts of famous historical leaders, such as Karl Marx and Vladimir Lenin, the exhibits have literally been rescued from socialist countries worldwide. An onsite gift shop sells a range of communist memorabilia, which may be of interest for those looking for an unusual souvenir and talking point.
Open hours: daily - 10:00 to dusk
Admission: charge, discounts for children 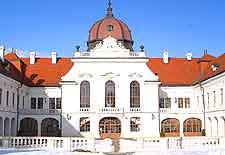 At around 27 km / 17 miles north-east of central Budapest and home to a population of just over 30,000 people, Gödöllö is a small and interesting town with a handful of quality attractions. Most tourists visiting Gödöllö head straight for the splendid 18th-century Royal Mansion, which is Hungary's biggest Baroque-style manor house. Famous for being home to the Gödöllö Artists Colony of the early 20th century, within the town itself are many more impressive Baroque buildings and monuments worth looking out for. 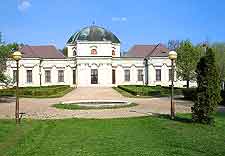 Situated on Hungary's Island of Csepel and to the south of Budapest, Ráckeve is an attractive town with a popular riverside park next to the Danube. Ráckeve's 15th-century Serbian Orthodox Church and its tall blue clock tower is one sight that you simply cannot miss and lies along the Kossuth Lajos Utca. The Savoy Mansion (Savoyai-kastély) is another prominent palatial attraction and was actually converted into a hotel and conference centre during the early part of the 1980s. 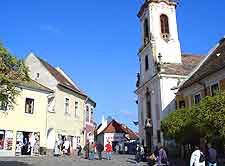 An appealing riverside town around 20 km / 12 miles from Hungary's capital city, Szentendre enjoys an especially scenic setting, next to the Danube Bend. Each year, droves of visitors arrive from Budapest to enjoy Szentendre's many museum attractions. A must-see is the Open-Air Ethnographical Museum, which should always be visited if you have time. Szentendre is extremely well connected by both train and boat, and is also known for its Roman heritage and contemporary art galleries.

Address: Vizipark Utca 1, Mogyoród, HU-2146, Hungary, HU
Tel: +36 06 28 541 100
Email: info@aquarena.hu
Website: www.aquarena.hu
Close to Budapest and a popular day trip for those with families, the Aquarena is the perfect attraction for a hot and sunny day. Crowds head to the exciting water park in the summer, to use the endless water slides and pools. Also available are various eateries, volleyball courts and many other outdoor recreational activities.
Open hours: April to October, daily - 09:00 to 19:00
Admission: charge, discounts for seniors, students and children, children under the age of three years old are free