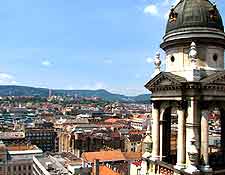 The spreading city of Budapest is mainly comprised of two main districts, which were in fact operating as completely independent cities less than 150 years ago. Today, Buda and Pest are divided by the River Danube and although each forms an important part of Budapest, they are still very individual and quite different, being linked by a series of bridges.

Within the two main regions of Buda and Pest are a total of 23 different numbered districts and many small neighbourhoods, which are always denoted by Roman numerals. Buda is home to six of these districts, Pest contains 16, while the final area stands on Csepel Island, which is the biggest island within the Danube and is linked by the city's railway.


Sights to look out for around Budapest include the Karoly Kamermayer Square, the old town area of Budafok-Varoshaz (District XXII), the Duna Korzo embankment walkway, and the Moricz Zsigmond Korter, an important downtown area of Buda. The main locations in Budapest are explained further below. 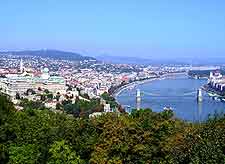 On the western banks of the River Danube, Buda is home to many important landmarks, such as Gellert Hill, Buda Castle and the beautiful Buda Hills, complete with their own railway, observation tower and chair lifts. Sited directly north of the Royal Palace, the aptly named Castle Hill (District I) area of Budapest boasts a strong medieval charm and is believed to have been the very first of the city's many districts of today, growing up around the heritage site of the castle itself, on the far southerly tip of Castle Hill.

Apart from Buda Castle, there are countless historical sights to see and photograph, such as the ruined Dominican Monastery and the many attractive buildings and churches around the Holy Trinity Square neighbourhood, which together form the very heart of the Old Town. Budapest's 18th-century Town Hall is just one of the many highlights surrounding the Holy Trinity Square. 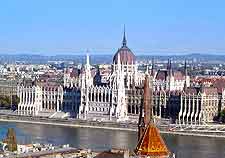 Pest lies on the easterly side of the River Danube and encompasses an important part of Budapest. An array of attractions reside in Pest, ranging from the Budapest Zoo and Botanical Garden on the Varosliget, to the magnificent Hungarian National Parliament, which is actually the biggest of its kind in the whole of Europe and enjoys a prominent riverfront position. A number of vantage points from the neighbouring Castle Hill tend to provide the best vistas across Pest, which is generally quite flat and devoid of steep hills. 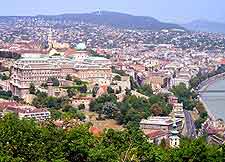 The Old Jewish Quarter (District VII / Erzsébetváros) is located within Pest and is brimming with character, offering the perfect place for an afternoon stroll. Although this area is not known for its tourist attractions, there are plenty of historic sights worth looking out for, such as the palatial Great Synagogue itself, which was built in the 1850s and is simply enormous, dominating the Dohany Utca. Walking around this part of Budapest is a little like stepping back in time, since much of the neighbourhood has remained largely unchanged for more than 50 years.