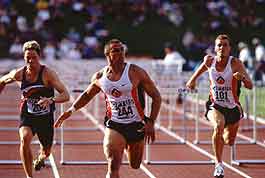 Being the birthplace of the earliest international Olympic Games of the modern era (1896), Athens is widely associated with sporting excellence. In fact, the ancient Olympics were first held within the relatively nearby historic city of Olympia (roughly 300 km / 186 miles to the west) to honour the 'Father of Gods', Zeus, being staged in 776 BC.

In 2004, the Greek capital of Athens once again played host to the Summer Olympic Games (Games of the XXVIII Olympiad), where more than 10,000 athletes competed in multi-sports events, ranging from athletics and swimming, to canoeing, tennis, weightlifting and wrestling. The games officially comprised 28 individual sports in total, with the various track and field events being counted as a single sport.

As a result of these games coming to the city, Athens immediately set to work upgrading its facilities and sporting venues during the lead up to the opening ceremony. The white-marble Panathinaiko Stadium (also Panathenaic / Kallimarmaro) played an important part in both the 2004 Summer Games (hosting the archery and the end of the marathon), as well as the actual history of the Olympics, since it was on this very spot where athletics records were broken way back in 1896.

The enormous Olympic Athletic Center of Athens resides within the north-eastern suburb of Marousi and comprises no less than five individual venues, together with a series of supporting sports facilities. These venues comprise the Olympic Stadium, Indoor Hall, Aquatic Centre, Tennis Centre and Velodrome.

Football in Athens is a passion for the locals and there are two main rival soccer teams - the Panathinaikos and the Olympiakos, who are often the subject of debate. Both teams are supported by many large private companies in Athens and football matches are played every Wednesday and Sunday during the season, which runs from September to May. The Panathinaikos team is based at the Olympiako Stadium in Marousi, which seats around 80,000 spectators, while the Olympiakos Athens football team is to be found at their home ground - the Karaiskaki Stadium in Piraeus.

Address: Chrysostomou Smyrnis Street, Glyfada, Athens, 166 75, Greece
Tel: +30 210 894 6459
Surprisingly for many visiting golfers, the Glyfada Golf Course is the only course in the whole city and is situated next to the site of the former Athens Airport, within the Glyfada region. With 18 holes and a par of 72, this championship resort has a practice range, a pro shop and equipment rental, as well as a highly recommended restaurant and bar. The distant sea views are a real highlight here.

Address: Apollonos Street, Vouliagmeni, Athens 166 71, Greece
Tel: +30 210 890 2000
Athens is home to many superb beaches and the Astir Beach Club is particularly special. With fine sand and excellent facilities, the club comes with beach chairs, umbrellas, showers, lockers, changing rooms, a volleyball court and a popular snack bar. An exciting range of water sports, including water-skiing, windsurfing and jet-skiing, are also available here, with regular bus transport connecting the club to the city centre.
Open hours: daily - summer 08:00 to 20:00, winter 08:00 to 18:00

Address: 137 Syngrou Avenue, Athens 171 21, Greece
Tel: +30 210 935 1888
Athens is where the marathon race actually originated, when a Greek messenger ran to deliver news of a battle victory. He ran all the way from Marathon to Athens with his important news and then sadly died from exhaustion shortly afterwards. First held in 1972, the Athens Classic Marathon is now a huge annual event and every year almost 10,000 participants from all over the world join in the races, which take place on the first Sunday in November. Starting at 08:30 from the historic battlefield, the main race finishes at the Panathinaikos Stadium.