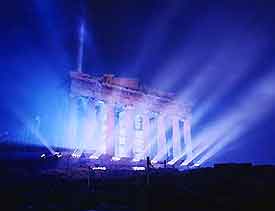 The culture of Greece has been around for many thousands of years, slowly evolving into today's present-day selection of museums, archaeological sites, religious festivals, ceremonial feasts and annual holidays. Within the capital of Athens are many of the country's biggest events and happenings, with almost 150 theatrical stages - the most in any city, anywhere on the planet.

The Athens Concert Hall (Megaron Moussikis) is a particular highlight, while specific things to do include the Ypapanti Festival at the beginning of February, the kite-flying at the Kathari Deftera each March, the holy week of Megali Evdomada in April, and the Pentkosti celebrations in June.

The Athens Festival (Epidaurus) also arrives in June and lasts throughout the summer, with its cultural themed events, live music and dancing, and theatrical performances being staged at venues such as the Odeon of Herodes Atticus, based on the southern side of the Acropolis. Of note, the tourist office on Amerikas Street has a free monthly English magazine, 'Now in Athens', which lists current cultural events and happenings around the city.