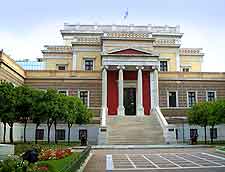 With so much history around almost every corner, it is hardly surprising that so many wonderful museums have appeared in Athens over the years, showcasing everything from architecture and archaeology, to religion and natural history. Many of these cultural attractions occupy prominent buildings in central Athens, such as the Old Greek Parliament House (the first home of the Greek Parliament), where the National History Museum resides.

The foundation stone of this building was laid in 1858 by Queen Amalia herself and construction was completed around 13 years later. In 1961, the Old Greek Parliament was opened as the National Historical Museum of Athens, and today houses countless objects that serve to illuminate the history of Greece. 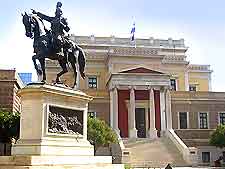 Address: Stadiou 11, Syntagma, Athens, 105 61, Greece
Tel: +30 210 323 7617
The National Historical Museum exhibits cover all of the major Greek events from the Byzantine period to the 20th century, displayed in chronological order. Highlights include Venetian armour, regional costumes, jewellery, Byron's sword, famous weapons, King Otto's throne and also the actual pen used to sign the Treaty of Serves in 1920. There is a gift shop and outside the building is a copy of the statue of Kolokotronis on horseback, which was made in 1900. Syntagma Station is the nearest Metro stop to the museum.
Open hours: Tuesday to Sunday - 09:00 to 14:00
Admission: charge

Address: Vass, Sofias and Koumbari Streets, Athens, Greece
Tel: +30 210 367 1000
Founded in 1931 by Emmanuel Benaki, who was a wealthy cotton merchant, the Benaki Museum is an interesting attraction with many Middle-Eastern collections. Benaki converted his house into this museum and then presented it to the state, so that members of the public could enjoy his usual exhibits. This is one of the oldest in Greece and certainly one of the best. There are over 20,000 items on display, including a mixture of gold, bronze and terracotta antiquities, Bronze age artefacts, jewellery, textiles and some Egyptian finds. There is also a vast array of pottery and glass, both Roman and Byzantine, coral-encrusted items from Safranbolu, mosaics and a gallery with many period paintings and engravings. The museum has a penthouse café with an outdoor terrace that overlooks the beautiful National Gardens of Athens.
Open hours: Monday, Wednesday, Friday and Saturday - 09:00 to 17:00, Thursday - 09:00 to midnight, Sunday - 09:00 to 17:00
Admission: charge 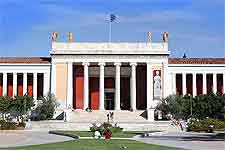 Address: 44 Patission Avenue, Exarcheia, Marathon, Athens, 190 07, Greece
Tel: +30 210 821 7717
Located in Marathon, the Archaeological Museum displays archaeological finds from local sites. Opened in 1891, this superb cultural highlight is often simply known as the National Museum. The museum contains a priceless collection of unique exhibits, including Mycenean gold and an enormous amount of sculpture, jewellery and pottery. The National Archaeological Museum is widely regarded to be one of the finest of its kind in the world.
Open hours: April to mid-October - Monday 12:30 to 19:00, Tuesday to Friday 08:00 to 19:00, Saturday and Sunday 08:30 to 15:00
Mid-October to March - Monday 10:30 to 17:00, Tuesday to Sunday 08:00 to 14:30
Admission: charge

Address: 13 Levidou Street, Kifissia, Athens, 145 62, Greece
Tel: +30 210 801 5870
The Natural History Museum is a popular attraction in the city and has a large collection of fossils, birds, reptiles, insects, mammals, shells, rocks and minerals. There are also more than 200,000 plants species on displays, including many rare specimens, and some of the plants were actually discovered by the museum itself. The Natural History Museum is located in the northern region of Kifissia and can be reached by Metro Line 1, stopping at Kifissia Station.
Open hours: Saturday to Thursday - 09:00 to 14:00
Admission: charge

Museum of the City of Athens (Vouros-Eftaxias)

Address: 7 Paparigopoulou Street, Klafthmonos Square, Athens, 105 61, Greece
Tel: +30 210 324 6164
The Museum of the City of Athens is housed in a stately mansion that dates back to the 1830s and was once a royal residence. Located in the Panepistimio neighbourhood, museum highlights include the throne room, a library, many paintings from the 19th century and an interesting scale model of how the city actually appeared in 1842. Panepistimio Station is the nearest Metro stop.
Open hours: Wednesday, Friday to Monday - 09:00 to 13:30
Admission: charge

Address: 5 Tholou Street, Plaka, Athens, 105 56, Greece
Tel: +30 210 324 0861
This three-storey house was the first home of the University of Athens and opened in 1837. In its first years there were just 52 students and over 30 professors. In 1841 the University of Athens moved to its present located and in 1963 this building was declared as a national monument. The museum opened shortly afterwards and now includes collections of scientific instruments, medicine jars, rare books, portraits, manuscripts and numerous photographs. The courtyard is used for theatrical performances in the summer. Monastiraki Station is the closest Metro Stop.
Open hours: Monday and Wednesday - 14:30 to 19:00, Tuesday, Thursday and Friday - 09:30 to 14:30
Admission: charge

Address: Vasilissis Sofias 22, Plateia Rigilis Kolonaki, Athens, Greece
Tel: +30 210 721 1027
This Florentine-style, neo-classical mansion was built between 1840 and 1848 and is now home to the city's Byzantine Museum. This house was converted to a museum in the 1930s and the entrance has been transformed into a stunning, mosaic courtyard. With a new, modern annexe, the permanent collection includes exhibits of icons, sculptures, frescoes, jewellery, reconstructions of churches and ecclesiastical silverware. The main collection spans over 1,500 years of Byzantine art and architecture and the exhibits are laid out in chronological order. The nearest Metro station to the museum is the Evangelismos metro stop.
Open hours: Tuesday to Sunday - 08:30 to 15:00
Admission: charge

Address: Diogenous 1-3, Aerides, Athens, Greece
Tel: +30 210 325 0198
Over 1,200 musical instruments were donated to the Greek state in 1978 by Cretan musicologist Phoebus Anogianakis. Housed in an elegant 19th-century mansion, the Athens Museum of Greek Popular Musical Instruments was opened in 1991 and is devoted to the history of popular Greek music. There are also headphones so that visitors to the museum can enjoy music from the past. Monastiraki metro stop is the closest station to the museum.
Open hours: Tuesday, Thursday to Sunday - 10:00 to 14:00, Wednesday - 12:00 to 18:00
Admission: charge

Address: Neofytou Douka 4, Kolonaki, Athens, Greece
Tel: +30 210 722 8321
This modern museum was opened in 1986 and offers the world's finest collection of Cycladic art. The museum has an extensive collect of ancient Greek art, with some of it dating from about 5,000 years ago. There are also exhibits from archaeological excavations, including some beautiful sculptures, statues and figurines. The third floor of the Museum of Cycladic Art in Athens is used for temporary exhibitions and downstairs there is also a café in the courtyard. Syntagma metro stop is the closed Metro station to the museum.
Open hours: Monday, Wednesday to Friday - 10:00 to 16:00, Saturday 10:00 to 15:00
Admission: charge