Athens, Greece is one of Greece's great cities and the local Athens people are cheerful, friendly and generally very helpful. Good manners are welcome everywhere and expected by most people in Athens.

With hot and sunny weather in Athens, this is undeniably a major-league cultural and historic city and worth a visit, whatever the time of year.

Greek is a highly gestural language and you certainly don't speak it with your hands in your pockets or with your head still. The body, face and its movements all form an integral part of the Greek language. A knowledge of ancient Greek is a useful basis, but is no substitute for the study of modern Greek. Although fluency in Greek is very useful in Athens, English is understood in most places on the main tourist routes. However, a small knowledge of the language and a few keywords is much appreciated and ensures greater contact with local people in Athens. 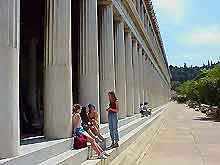 Smoking is very much commonplace in Athens and Greece as a whole and very few places maintain no smoking policies. However, some places do have no smoking areas and most restaurants are airy and in the summer it is possible to enjoy your meal outside, in the open air.

The Euro is made up of eight coins and seven paper notes and was introduced on January 1, 2002. The 12 original members of the European Union - Austria, Belgium, Finland, France, Germany, Greece, Germany, Italy, Luxembourg, Netherlands, Portugal, and Spain - planned the event for more than a decade, determining a conversion rate for each country's national currency. The colourful Euro bills, which include holograms and shades of green, yellow, blue, mauve, and orange, are identical across the Euro area. Coins have one common and one national side, but they can be used in any of the member countries, regardless of the country of issue. Old currencies are no longer accepted, although they can still be converted to Euros in central banks. 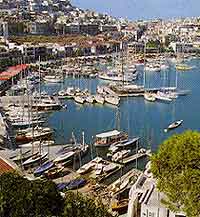 Eating out in Athens is generally a long affair and Greeks take their time to thoroughly enjoy the whole dining experience. Consequently, this can mean that the waiter is very busy and attentive, but in return they do receive generous tips. This can be as much as 20 percent if the service is exceptional, however around 10 to 15 percent is more usual. Although prices in most restaurants do include service, for facilities such as air conditioning, the waiters still except some kind of tip so be sure to have some coins for this. You should always pay tips in cash, as this way you can be sure that the person it is intended for receives it fully.

Public toilet attendants in Athens should also be tipped. Taxi drivers, hotel porters and chambermaids do not usually expect a tip, although they are not averse to receiving them and it is always welcomed.

Crime in Athens is fairly uncommon and is more likely to be carried out by tourists than locals. If you were to accidentally leave your luggage left in a bar or café, it would usually remain completely untouched.

VAT (IVA) is always included in the price in Athens and this is around 18 percent. Visitors from outside the EU who are staying less than three months in the country may claim this money back on purchased over 117 euros. A 'tax-free cheque' form must be completed in the shop and a copy of this is then given to customs when leaving the country.