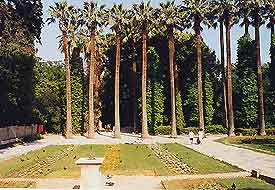 Athens, Greece, can really boast about its splendid parks, in a city where large expanses of green are not commonplace. In particular, the National Gardens of Athens is full of plants and trees and is the perfect place to relax under the shade of a large tree on a hot, sunny day.

The Athens parks and gardens include some that were the former private gardens and parklands of the city's nobility, and whether it is just a small square with surrounding trees or a larger open space, they are all peaceful places to relax.

Address: Amalias Avenue, Athens 106 71, Greece
Tel: +30 210 721 1178
Athens' National gardens were created in 1839 for Queen Amalia, when her royal palace neared completion. Literally thousands of plants were brought in by cart by from Italy and also many parts of Greece. Teams of workers planted and landscaped the area and transformed it into the beautiful gardens that are still there today. Highlights include some Roman antiquities that were discovered when the garden was being created, a large duck pond, a small zoo with mainly birds, numerous little pathways that meander around the park with lots of seating areas, a row of 100-year-old palm trees, a rose arbour and over 500 different varieties of plants, thriving under the canopy of large trees.

The royal gardens cover around 16 hectares / 40 acres and were opened to the public in 1923, when the park became known as Athens' National Gardens. A small pavilion in the gardens has now become the Botanical Museum, with interesting drawings, paintings, photographs and a selection of plants and seeds. Nearby is the Children's Library, with many books and games in several languages, including Greek, English and French. Other facilities at the park include a children's playground and a popular a café, serving drinks and snacks. Athens' National Gardens provides the perfect shady spot to relax on a typical sunny day in the city. Syntagma Station is the nearest Metro stop to Athens' National Gardens.
Open hours: gardens - daily, museum - Tuesday to Sunday, 09:00 to 15:00

Address: Amalias Avenue, Athens, Greece
Situated between the National Gardens and the Temple of Zeus is Zappeion Park. The splendid and peaceful gardens surround the grand Zappeion Hall, which was built in the late 19th-century. When the National Gardens were under construction, Zappeion Gardens were nothing more than a field of barley. The park is popular with locals in Athens and also includes some volleyball and basketball courts. Zappeion Hall is an impressive building and is now used as a conference centre.

Address: Anapafseos, Mets, Athens, Greece
Tel: +30 210 923 6118
Athens' First Cemetery or Municipal Cemetery is a peaceful spot in the city, filled with many large olive and pine trees, and also the smell of incense burning from the well-tended tombs. Although not strictly a park as such, the green cemetery is filled with numerous plants and trees, and does resemble a garden. There are many interesting tombs and some are real works of art in their own right. Locals tending the graves often make this a family outing and it is not unusual to find small groups of people having a picnic in the cemetery.