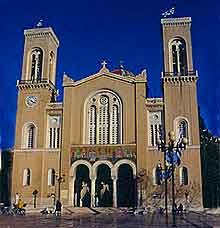 There are an enormous number of beautiful, ancient churches, cathedrals and religious buildings in and around Athens and most are in superb condition.

Address: Mitropoleos Square, Plaka, Athens 105 56, Greece
The Church of Panagia Gorgoepikoos is located in the Plaka region of Athens and was built over 700 years ago on the ruins of the temple of Isis-Eileithyia. Much of the ruined ancient temple was used in the creation of this beautiful church and the walls incorporate many marble murals from these remains. This church is full of history and is close to the Syntagma Station Metro station.

Address: Kessariani Forest, Athens, Greece
Tel: +30 210 723 6619
Kessariani Monastery is just a short drive from Athens city centre and is situated on the slopes of Mount Ymittos. This famous monastery dates back to the 11th century and was actually built on the remains of a church from the 6th century. Highlights include the St. Anthony Chapel, a 19th-century bell tower and some splendid religious works of art.
Open hours: Tuesday to Sunday - 08:30 to 15:00

Address: Mitropoleos Square, Plaka, Athens 105 56, Greece
For Athens to become the capital city of Greece it was necessary to build a impressive cathedral. Building commenced in 1834 and in 1863, the Metropolis Greek Orthodox Cathedral was finally completed. The cathedral soon became the most important church in the whole of Greece and the interior is richly decorated with exquisite paintings and detailed murals. This Athens cathedral is used for many official occasions in Greece. There is a Sunday mass held every week early in the morning and visitors are welcome. This Athens cathedral is close to the Syntagma Metro station.

Address: Ermou 148, Thiseo, Athens, Greece
Tel: +30 210 346 3552
The Keramikos is Athens has been an ancient burial ground for over 3,000 years and was discovered in 1861, when the street that leads to Piraeus was being built. Most of the graves that remain today are along the Street of the Tombs and they consist of an interesting collection of monuments, columns and detailed sculptures. The Oberlaender Museum is nearby and houses many artefacts from the site, including a large collection of terracotta figurines and vases.
Open hours: Tuesday to Sunday - 08:30 to 15:00
Admission: charge