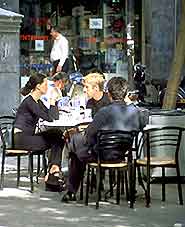 Dining in Athens is a particularly social affair, whether with family, friends or for business. Eating out is both affordable and popular, and local restaurants are often very busy.

Lunch in Athens is normally taken any time from midday until as late as 18:00. Dinner is generally eaten quite late, from around 09:00 to 23:30, or even later, while on Sundays, restaurants usually only open for lunch.

Tavernas are casual eating establishments and they provide some excellent food and good value. Traditional tavernas in Athens are open from mid-evening and stay open until late. They are also sometimes also open for lunch. The menus tend to be fairly short and usually include a selection of snacks / starters (mezedes) and four to six main courses, which might typically include casseroles and other dishes cooked to order, served with a choice of vegetables, salads, fruit and of course, Greek wine.

A 'psaro taverna' is a good place to dine on fish dishes, but these eateries are often quite expensive and resemble restaurants rather than typical tavernas. The best place for seafood in Athens is in Piraeus, in particular, down by the little harbour of Mikrolimano. Here the cuisine is as enjoyable and delightful, and the waterfront setting is understandably popular with the local Athenians. Therefore, booking is advisable and arriving early essential, otherwise you booking may be lost. 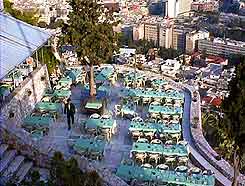 Athens restaurants (estiatoria) are more sophisticated than traditional taverns and this is generally reflected in their prices. The traditional Greek restaurant in Athens is one of the most enjoyable places to eat and the food is homemade and extremely tasty. A typical menu would include taramosalata, (pureed salted mullet roe), souvlakia (chunks of pork grilled on skewers), moussakas (made with layers of potato, fresh aubergine and spiced meat), keftedes (pork mince with egg and breadcrumbs), dolmades (stuffed vine leaves), kleftiko (goat meat wrapped in parchment paper) and psaria plaki (a whole, baked fish with vegetable and olive oil sauce).


Most Greeks do not really eat breakfast in Athens and instead settle for a cup of coffee and a newspaper. Breakfast is the least important meal of the day for locals in Athens and the most you might expect is fruit, French-style croissants or delicious, sweet brioche-style rolls known as koulourakia.

Al fresco dining is particularly popular in Athens and tourists can eat outside all year round in the streets and squares of the city. Vegetarians need not worry and Greek cuisine provides plenty of choice. Vegetable dishes are fairly inexpensive, very tasty and quite substantial.