Plymouth Weather, When to Go and Climate Information

The climate in the south-west and around the city of Plymouth is amongst the best that England has to offer. With hot summer weather from late May to September, temperatures in Plymouth tend to peak in July and August. Many days of sunshine and temperatures exceeding 25°C / 77°F can be expected during these months, with occasional refreshing breezes from the Sound and beyond. 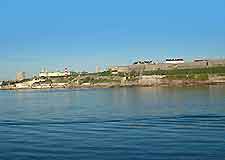 Many beaches are close to Plymouth, including those of Seaton and Looe, in nearby Cornwall, to the south-west. These sandy beaches are always popular during the summer months, becoming noticeably quieter from September onwards, when many good days of sunny weather can still be expected from late summer to early autumn.

The winter months around the Plymouth area tend to by fairly mild, due to its coastal position, and it is necessary for locals to mow their lawns throughout the year, including the winter season. 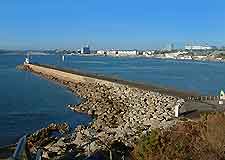 Although a number of fine, crisp days are usual during the winter months, so is fairly wet weather and heavy showers can be commonplace and can last for many hours. Spring soon arrives and the climate in March soon starts to feel warmer, with the days getting longer as the daylight hours begin to increase.

The summer season is Plymouth's busiest time and many visitors arrive at this time of the year. However, despite the fine weather, rainy days are by no means unusual and at these times, shops and indoor attractions, such as the National Marine Aquarium, can quickly become crowded, as people descend to escape the wet weather.