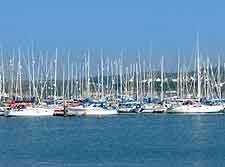 Plymouth is a busy city and caters well to visitors, offering plenty of local festivals and colourful events. These include seasonal carnivals, fairgrounds, concerts, speedboat racing and a host of charity events.

Farmers' markets are held twice a month, throughout the year, taking place on the second and fourth Saturday and offer a good opportunity to sample some of the best produce that the West Country has to offer.