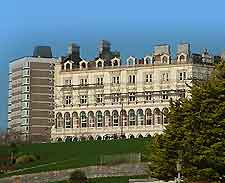 Plymouth has long been a prominent tourist hotspot and features plenty of accommodation for everyone. Many of the city's main hotels lie in the heart of Plymouth, which is made up of a gridwork of roads and avenues.

The shopping centre is this part of Plymouth has recently undergone considerable renovation and landscaping, now featuring large block-paved pedestrianised areas, landscaped areas of green, seating areas and a number of fountains and water features. Hotels are never far away from the city's main shopping districts, department stores and restaurants, including a number of hotels around Charles Street and near to the Drake Circus shopping mall. 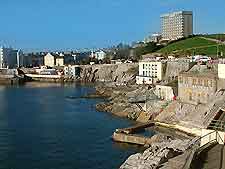 A selection of particularly desirable hotels in Plymouth can be found around the Barbican and Hoe areas, next to the waterfront. Offering spectacular views of the Plymouth Sound and also nearby Drake's Island, the Admiral Wiltun Hotel along Grand Parade is a popular option and known for its outdoor patio area with surrounding coastal scenery. Situated on the Hoe itself, the Bowling Green Hotel can be found in Osbourne Place on Lockyer Street and features reasonably priced accommodation in an attractive, historic Victorian building.

One of Plymouth's biggest independent hotels, the New Continental Hotel lies along Millbay Road, in the city centre, and dates back to 1875. The hotel features a large car park for up to 80 vehicles, and almost 100 en-suite guest rooms. Nearby and overlooking the Plymouth Sound, the Hotel Mount Batten can be found along Lawrence Road and features almost 20 guest rooms, a bar and restaurant with panoramic views.

Bed and breakfasts offer excellent value for money and many options lie on the eastern side of Plymouth, in the Plympton area, alongside the River Plym, and also around Sparkwell and Cornwood. Of particular interest, the B&B at the Broadmoore Farm dates back to the end of the 16th century and is located at Newton Ferrers, while close to Wembury, the Langdon Court Hotel and Restaurant on Langdon Court is also extremely historic and comes highly recommended.

Further hotels around Plymouth are situated on the northern side of the city, around Peverell and the Mutley Plain. Also worth considering are the Stonehouse and Devonport areas, much of the Dartmoor wilderness, hotels with countryside views in South Hams, and the numerous tourist resorts in Cornwall, to the south-west.