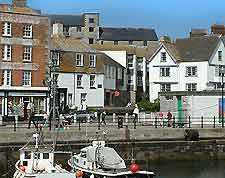 Plymouth is a large and spreading coastal city and has changed its appearance dramatically over recent years, and includes a modern shopping centre and many stylish, contemporary buildings. If you dig a little deeper you will find plenty of remnants of Plymouth's past, including many well-preserved buildings and structures around the various districts and neighbourhoods. Located on the northern side of Plymouth, the districts of Mutley and Peverell are worth of a look and feature a number of thriving local communities, including many young students.

Of course, much of Plymouth's charm is based around the waterfront area and here you will find shops, restaurants and walking trails, just waiting to be explored. Plymouth is well placed for those looking to travel outside of the city. The many towns and villages of Cornwall are especially close, together with the wilderness that is Dartmoor, and also the popular South Hams district, which lies between the south of Dartmoor and Devon's southerly coastline. Here are Plymouth's main districts, neighbourhoods and locations. 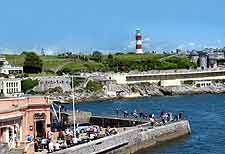 Just a short walk from Plymouth's central district, the Hoe is without doubt the city's highlight and boasts spectacular views across the Sound. Due to its appealing waterfront setting, many of the city's main events take place around the Plymouth Hoe and include fireworks displays. The Smeaton's Tower lighthouse dominates much of the Hoe neighbourhood, with its flashy red and white structure, while other attractions include the Plymouth Dome and also the 17th-century Royal Citadel.

Plymouth city centre is where you will find much of the action and although this area was devastated by bombing during World War II, the district was soon restored and rebuilt. Today, central Plymouth is where you will find the main shopping centres and is well pedestrianised, with great expanses of paved areas and small pockets of planting. Plenty of places to eat out can also be found around the city centre, together with a number of prominent nightclubs, which begin to fill up as the evening arrives. There are a number of venues where you can be entertained, such as the Theatre Royal along the Royal Parade. Those looking for historical remains in this district will find a few old buildings, such as Merchant's House and also nearby Prysten House. 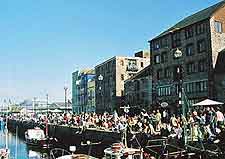 The vibrant Barbican area is a particularly historic part of the city and comprises a number of parallel and interconnecting streets, lined with many attractive and old buildings. Those looking for an alternative to the shopping centre in the heart of Plymouth will not be disappointed with the shops on offer in the Barbican district, which tend to be a little more specialist and include a number of notable art galleries. Must-see attractions around the Barbican include the National Marine Aquarium, the Mayflower Exhibition and also the Elizabethan House along New Street.