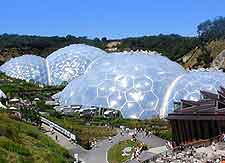 There are numerous truly world-class attractions just a short drive from the city of Plymouth, many of which can be found in nearby Cornwall. The Cornish beaches are especially popular and many people staying in Plymouth visit the sandy stretches of nearby Looe and St. Austell on Cornwall's southern shore, and nearby Newquay on the northern shore.

Day trips to the many nearby attractions in Cornwall are especially popular with tourist staying in Plymouth and the spectacular indoor tropical gardens at St. Austell's Eden Project are not to be missed. Also nearby in the ancient and charming town of Saltash, which boasts two imposing bridges and a notable Heritage Trail, and the market town of Totnes, where many medieval buildings and remains can be discovered. 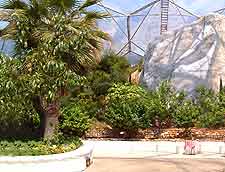 Address: Bodelva, St. Austell, Cornwall, PL24 2SG, England, UK
Tel: +44 (0)1726 81 1911
One of Cornwall's biggest attractions and just over 35 miles / 56 km from the city of Plymouth, the Eden Project is famous for its enormous conservatory domes, which are amongst the largest of their type on the planet. In fact, the gigantic Humid Tropics Biome is the world's biggest conservatory and is approximately 240 metres / 785 feet long, by 110 metres / 360 feet wide and around 50 metres / 164 feet high. With many surprisingly large tropical plants, including palm trees and many other specimens more familiar to us as small houseplants, together with an epic waterfall and numerous orchids, the Eden Project is worth visiting for the architecture alone.
Open hours: daily, April to October - 10:00 to 18:00; November to March - 10:00 to 16:30
Admission: charge, discounts for children, students and seniors, children under five free, discounts when tickets purchased in advance

Address: Cremyll, Torpoint, Cornwall , Devon, PL10 1HZ, England, UK
Earl's Garden is located approximately 20 miles / 32 km from the city centre and is sited alongside the magnificent 18th-century Tudor-style Mount Edgcumbe House, and features many extremely old and mature specimen plants and trees. Also of interest here is a beautiful Victorian east lawn terrace, boasting impressive views across the Plymouth Sound. Nearby and located in the Lower Park area, the Formal Gardens are particularly historic and date back two centuries, when they were first planted and landscaped. With a number of European influences being clearly present, including both French and Italian style planting, the Formal Gardens also features a particularly impressive New Zealand garden and a large Orangery restaurant, which can seat around 100 people.
Open hours: daily - 10:00 to 16:30
Admission: charge, discounts for children 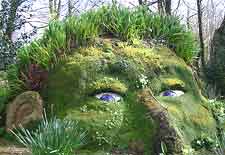 Address: Pentewan, St. Austell, Truro, Cornwall, PL26 6EN, England, UK
Tel: +44 (0)1726 84 5100
Approximately 40 miles / 64 km from the centre of Plymouth, the Lost Gardens of Heligan are the result of a major restoration project. The gardens were the pride and joy of the Tremayne family from the late 16th century onwards, and yet during the 20th century, became completely overgrown and unrecognisable. Following a major storm in 1990, the beauty of the underlying themed gardens was discovered and following considerable work, including planting and re-landscaping, the Gardens of Heligan were reborn and include a jungle area, large ponds and many ancient, mature plant specimens. With a busy restaurant, large gift shops and plenty of spacious lawns, the gardens have something for everyone.
Open hours: daily, March to October - 10:00 to 18:00, November to February - 10:00 to 17:00
Admission: charge, discounts for children, seniors and families, children under five are free


Other attractions just a short drive from the centre of Plymouth include the following, all of which are worth visiting and appeal to a wide range of tastes.